How to perform request/response validation in Hexawise

In the previous article related to APIs, we looked at the basics of applying Hexawise to testing the business logic (e.g. successful payment given multitude of factors, their interactions and associated rules).

In this one, let's talk about the data as it relates to the communication between systems - using this guide by Pact as a reference (note however - these Hexawise methods are not limited to or specific to contract testing).

We will leverage a slightly modified setup. There are still a consumer (Order Web) and its provider (the Order API). And we will still be submitting the request for product information from Web to API, but will "enrich" the attributes a bit:

Response (keeping in mind we care more about the structure and format compatibility than about the business logic calculations):

Both approaches described below are viable, and the choice will depend on the specific system & testing goals, as discussed in the "Decision Points" section later.

This is similar to the plan designed in the previous article. We will have a Hexawise parameter for each eligible request and response attribute that a) varies in finite manner; b) needs to be validated. 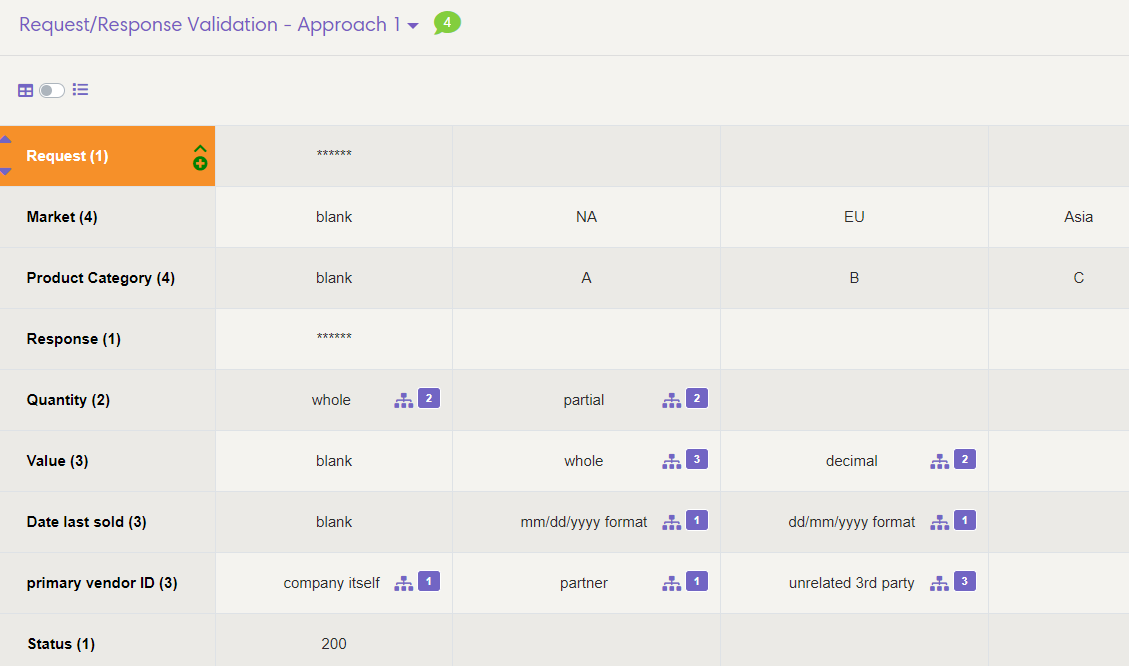 Value expansions play the role of data specification in such models (e.g. 2/3/2022) since they would be the only element populated in the CSV or Automate export (which are typically used for this type of testing).

Each row in the Scenarios table would describe all parameterizable response attributes for a given request combination. 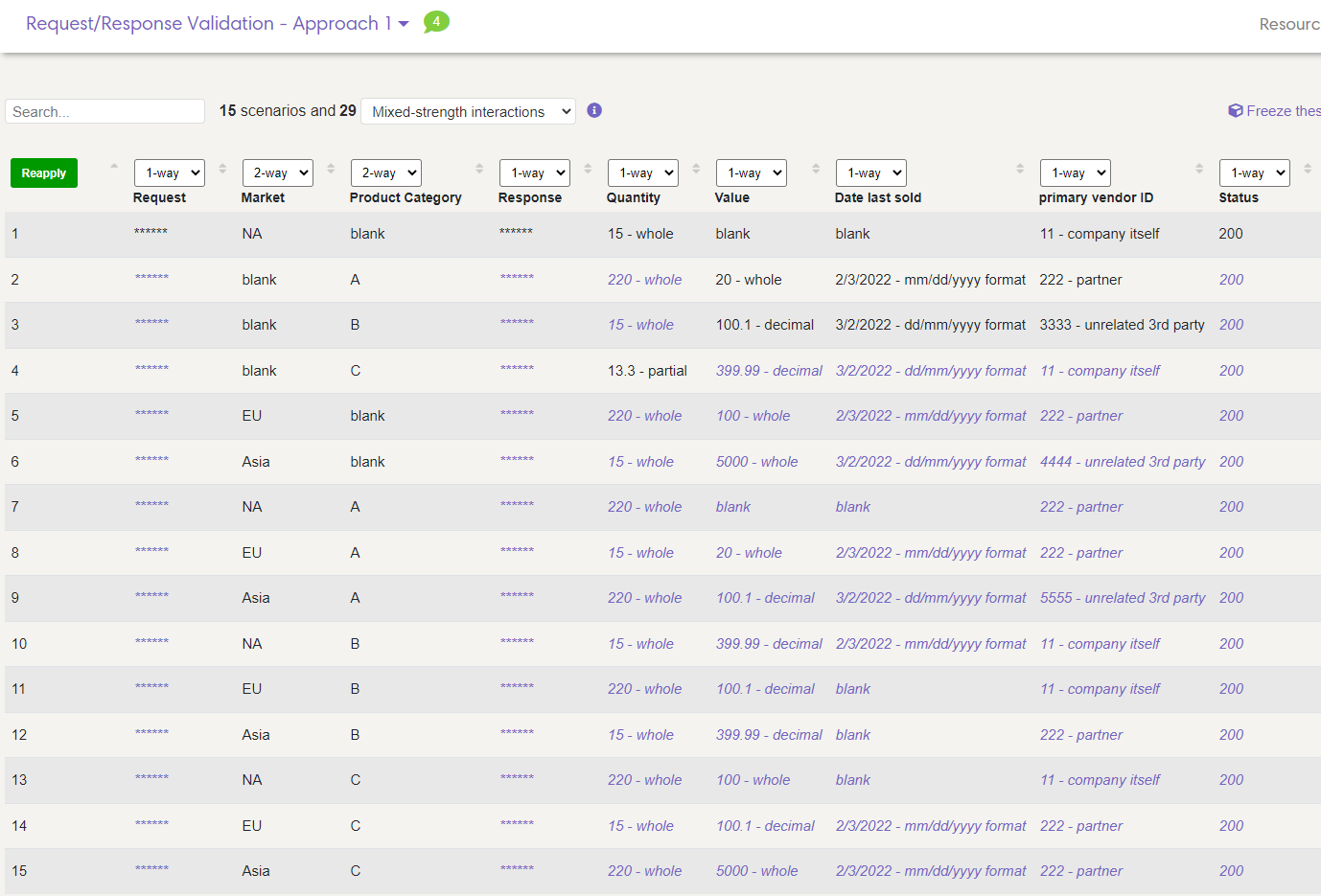 With data validation testing, there are usually fewer interactions/dependencies between the attributes. So, the mixed-strength setting with some 2-way on the request side and mostly 1-way on the response one is expected.

One script with "Then" line per attribute would cover all scenarios: 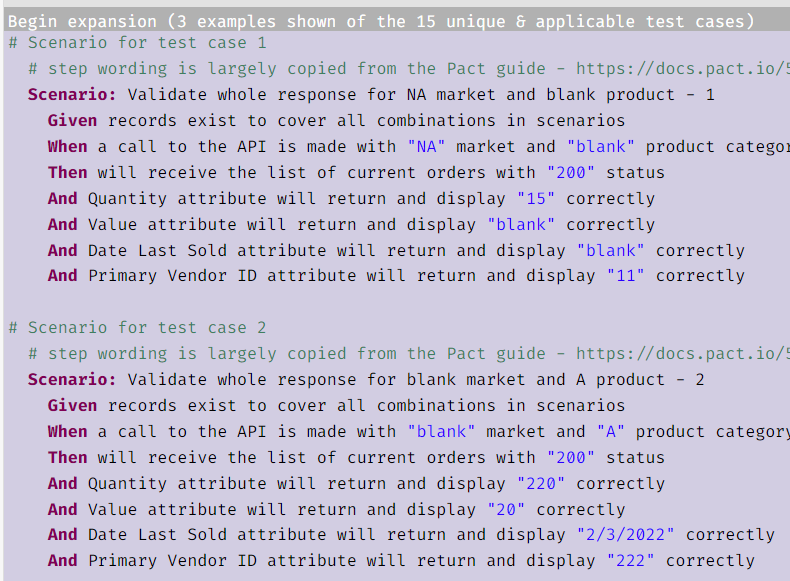 Side note: if there are attributes that don't have format variations, can't be blank and therefore wouldn't become Hexawise parameters, the steps & validations for those would be hardcoded (i.e. without <> syntax) in the script.

Then we will constrain each Validation Element only to the relevant Value. 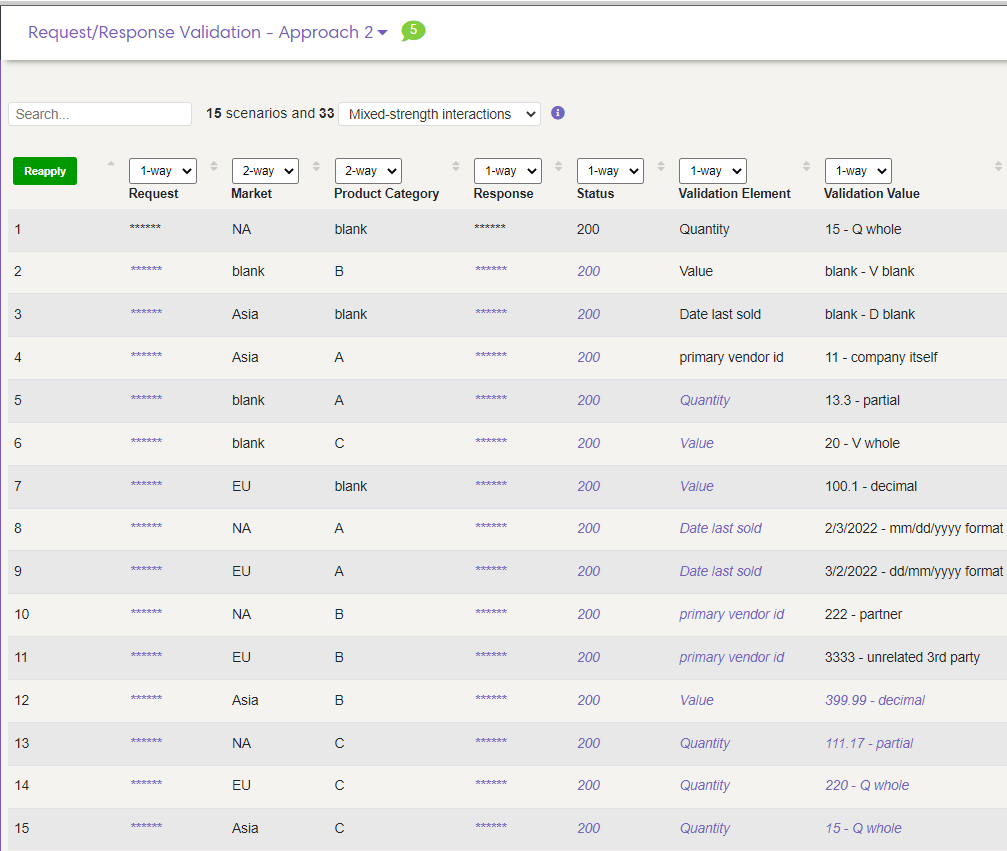 A single script with a single "Then" line would cover all scenarios, because the key wording is dynamically tied to the TC table:

To no surprise, the points below are the mirror reflection of the above.

Side note: "number of tests" as a metric becomes irrelevant in this comparison since the number of steps per test and the corresponding execution time/effort are too different.

Hopefully this article has demonstrated how Hexawise can be applied to use cases where n-way interactions are not really the priority anymore. The speed of scenario generation and the one-to-many scripting move into the spotlight, so the tool can still deliver benefits in either approach.

Extra consideration: shared Hexawise model can serve as another collaboration artifact between the consumer and the provider, which could allow to uncover mismatching expectations between much faster.

If you have any questions or feedback on the article, don't hesitate to reach out to support@hexawise.com