Learn how an optimized set of scenarios for a stock trading application is efficiently designed in Hexawise.

In order to test trading stocks across different markets, this model demonstrates eleven different test conditions for each test scenario. Even in this over-simplified example, there are over 600,000 possible scenarios. In this context, we want to test this process relatively thoroughly - with a manageable number of tests.

We know that testing each item in our system once is not sufficient; we know that interactions between the different things in our system (such as an existing user type interacting with a purchase type of sale, for example) could well cause problems. Similarly, we know that the written requirements document will be incomplete and will not identify all of those potentially troublesome interactions for us. As thoughtful test designers, we want to be smart and systematic about testing for potential problems caused by interactions without going off the deep end and trying to test every possible combination. 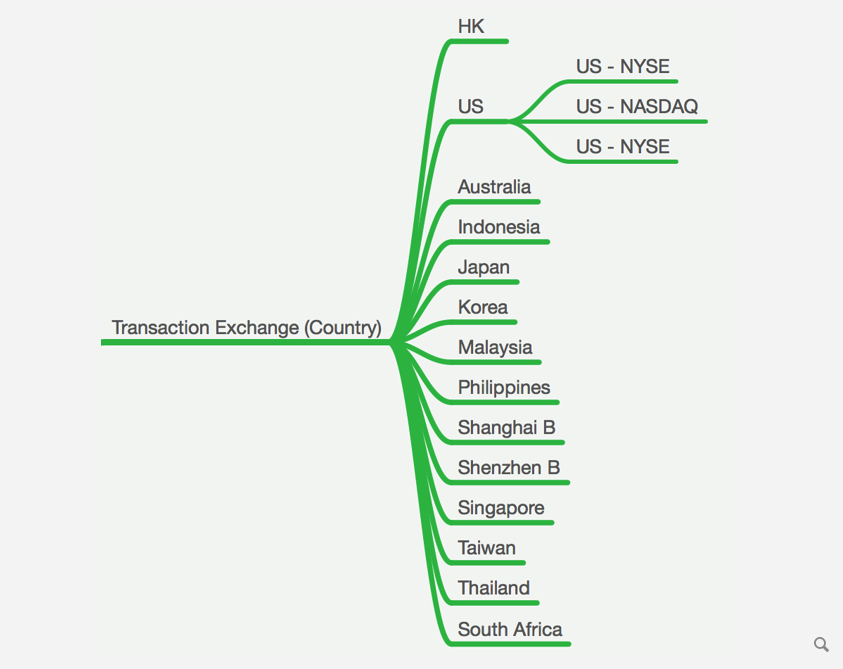 In general having many parameter values is something to avoid as it greatly increases the number of tests needed. There are ways to get around having long lists of values; Equivalence Classes with Value Expansions is the most common method. However, sometimes the requirement for testing functionality or integration points outweighs the need for a small set of optimized tests.

In this sample model, we have a very critical parameter: Transaction Exchange (Country). This parameter determines the exchange that is used for the orders being placed. If one of the available options for an exchange is not functioning it can cause not only headaches for the traders but potentially millions of dollars in lost profit. The testers are required to test every single exchange with all of the other determined parameter values.

The parameter Transaction Exchange (Country) has fourteen values. And one of the values (US) even has a value expansion. Read on for how we ensure there is even greater coverage of this particular parameter.

Designing powerful software tests requires that people think carefully about potential inputs into the system being tested. And how those potential inputs might impact the behavior of the system. As described in this blog post, we strongly encourage test designers to start with a verb an a noun to frame a sensible scope for a set of tests and then ask the "newspaper reporter" questions of who?, what? when? where? why? how? and how many? 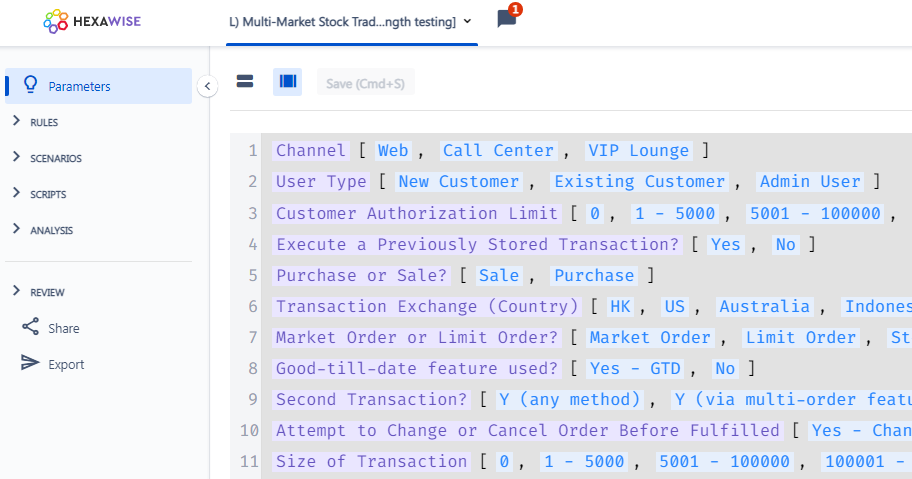 Once we have decided which test conditions are important enough to include in this model (and excluded things - like "What shirt do they wear when trading stock?" - that will not impact how the system being tested operates), Hexawise makes it quick and easy to systematically create powerful tests that will allow us to maximize our test execution efficiency. 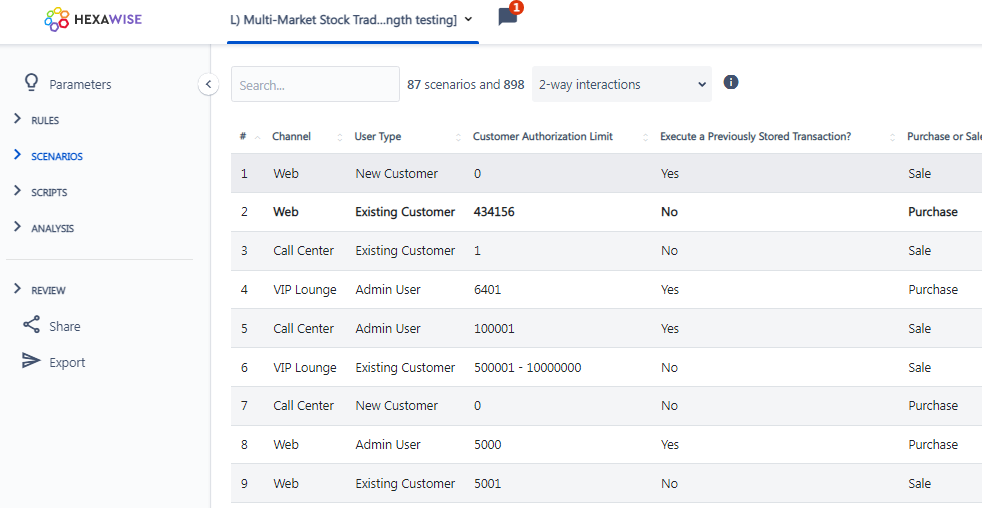 The coverage achieved in the 87 tests above is known as pairwise testing coverage (or 2-way interaction coverage). Hexawise-generated pairwise tests have been proven in many contexts and types of testing to deliver large thoroughness and efficiency benefits compared to sets of hand-selected scenarios.

Hexawise gives test designers control over how thorough they want their testing coverage to be. As in this case, Hexawise allows testers to quickly generate dozens, hundreds, or thousands of tests using Hexawise's "coverage dial." If you have very little time for test execution, you would find those 87 pairwise tests to be dramatically more thorough than a similar number of tests you might select by hand. If you had a lot more time for testing, you could quickly generate a set of even more thorough 3-way tests (as shown in the screen shot immediately below).

Hexawise generates and displays this extremely thorough set of 505 three-way tests to you within a few seconds. It would be dramatically more thorough than typical sets of manually selected test scenarios typically used by large global firms when they test their systems.

If a tester spent a few days trying to select tests by hand that achieved 100% coverage of every single possible "triplet" of Values (such as, e.g., (i) Existing User, and (ii) Thailand exchange, and (iii) Sale), the following results would probably occur: 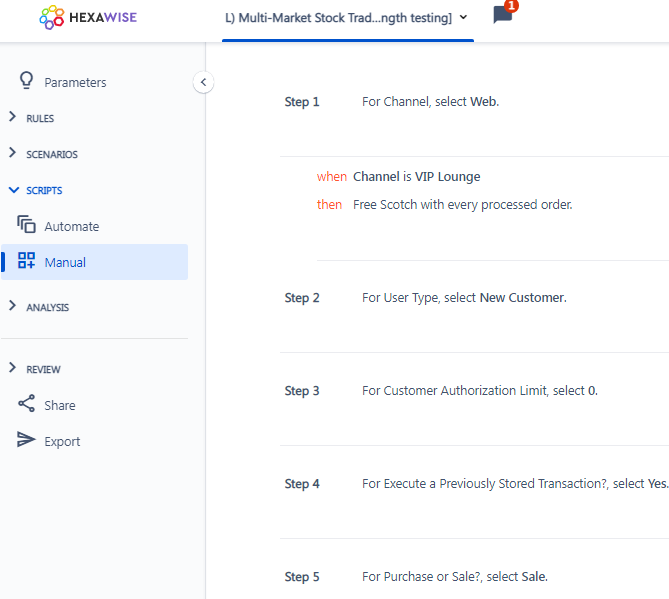 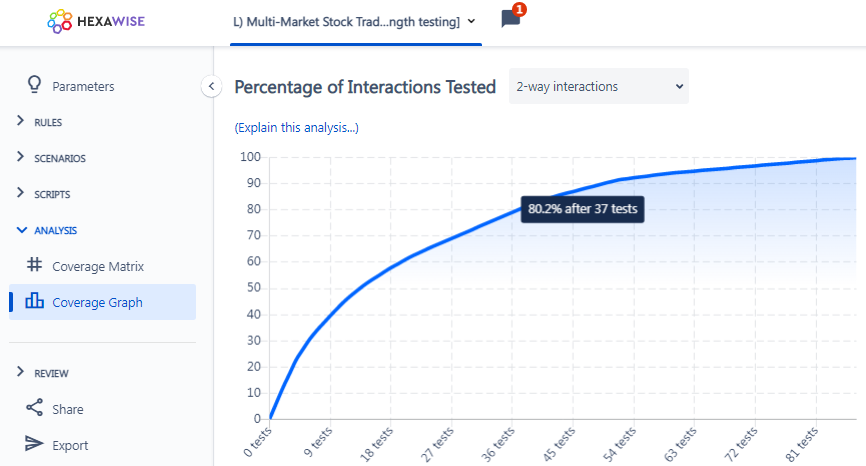 We know we would achieve 80.2% coverage of the pairs in the system if we stopped testing after test number 37, but which specific coverage gaps would exist at that point? See the matrix chart below for that information. 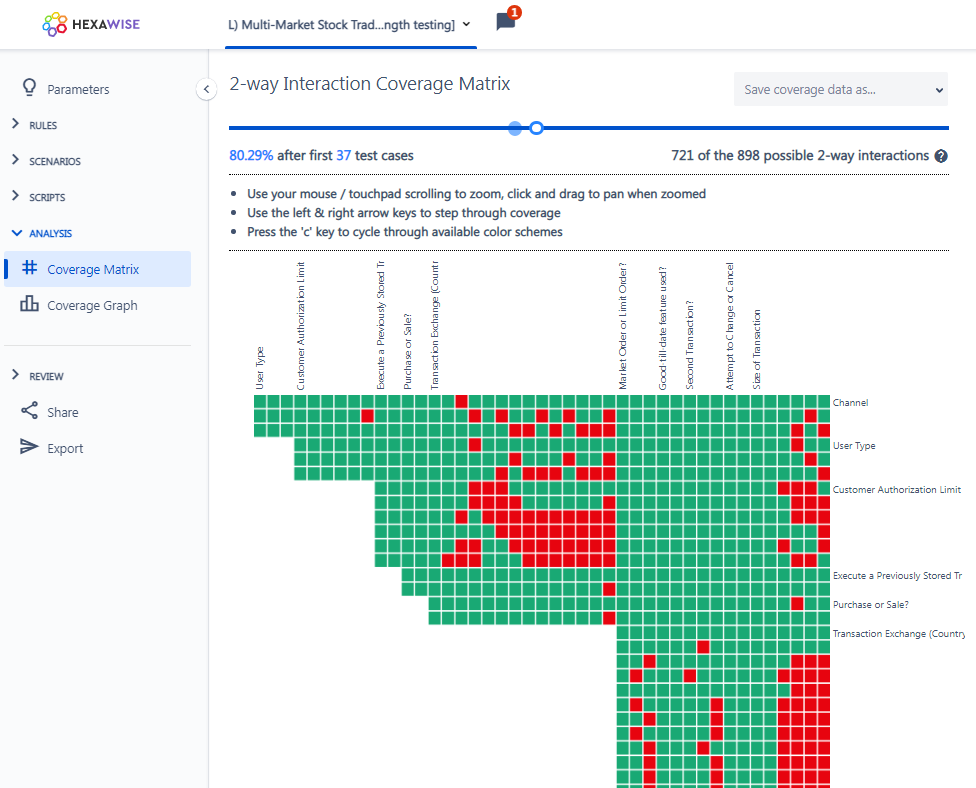 The matrix chart above shows every specific pair of values that would not yet tested together if we were to stop testing after test number 37.

For example, in the first 37 tests, there is no scenario that includes both (a) "Customer Authorization Limit - 1 - 5000" together with (b) "Transaction Exchange (Country) - Indonesia." 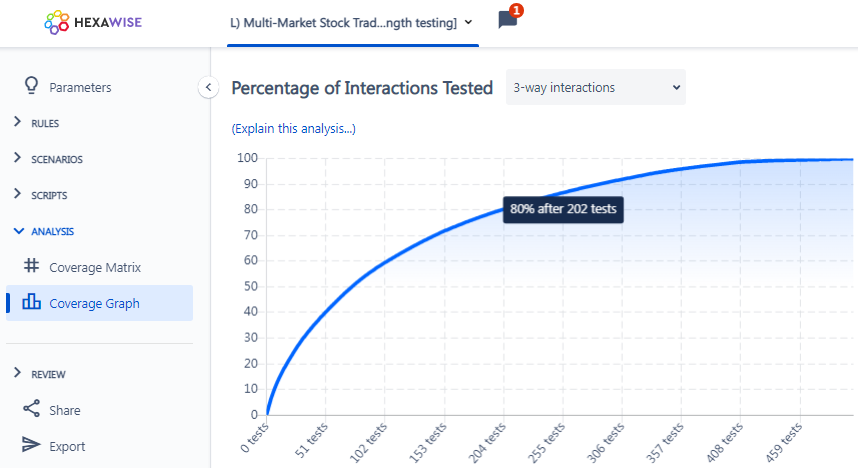 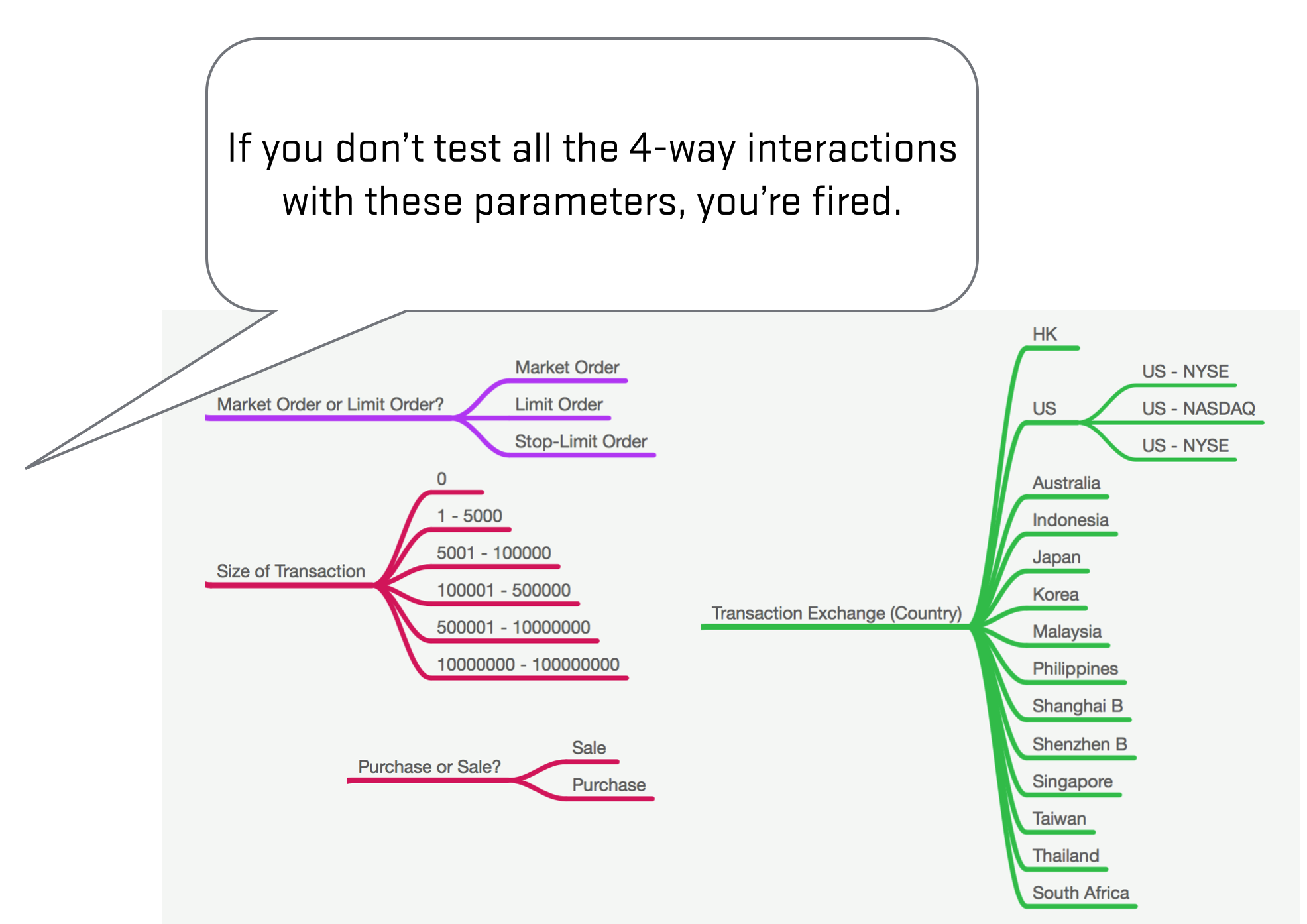 In this example, we want to test every single possible combination involving (a) Purchase or Sale, (b) Transaction Exchange (Country), (c) Market or Limit Order, and the (d) Size of Transaction. That's because each Exchange needs to have the primary transaction details tested very thoroughly. Stakeholders (and loud, bossy, hostile ones, at that) have made it extremely clear that, whatever else we do, we NEED to be VERY sure to test EVERY 4-way interaction involving these 4 "high priority" parameters. We can't forget to test any of those 4-way combinations.

For the avoidance of doubt, one of such high-priority combinations would be:

If you're thinking "Easy! Let's just execute all 1,971 scenarios from our 4-way set!", you're on the right track. That "brute force" solution would certainly achieve our new objective of getting comprehensive coverage of every possible 4-way combination involving the highest priority variables in our System Under Test. However, we simply do not have that much time to test here. It would be nice to have the luxury of enough time to execute all those tests, but life is filled with setbacks and disappointments, isn't it? As it stands, we only have half as much time as originally planned. We need to achieve 100% coverage of these super high priority 4-way combinations and also achieve 100% coverage of every possible pair of test inputs - whether or not the pairs are "high priority". (As an example, one such pair would be Customer Authorization Limit = 0 tested together with Second Transaction? = N).

No problem. We can achieve all three of our goals with the Mixed-Strength feature:

We mark our high priority columns with 4's above them to ensure we'll generate tests for all targeted high priority 4-way combinations. 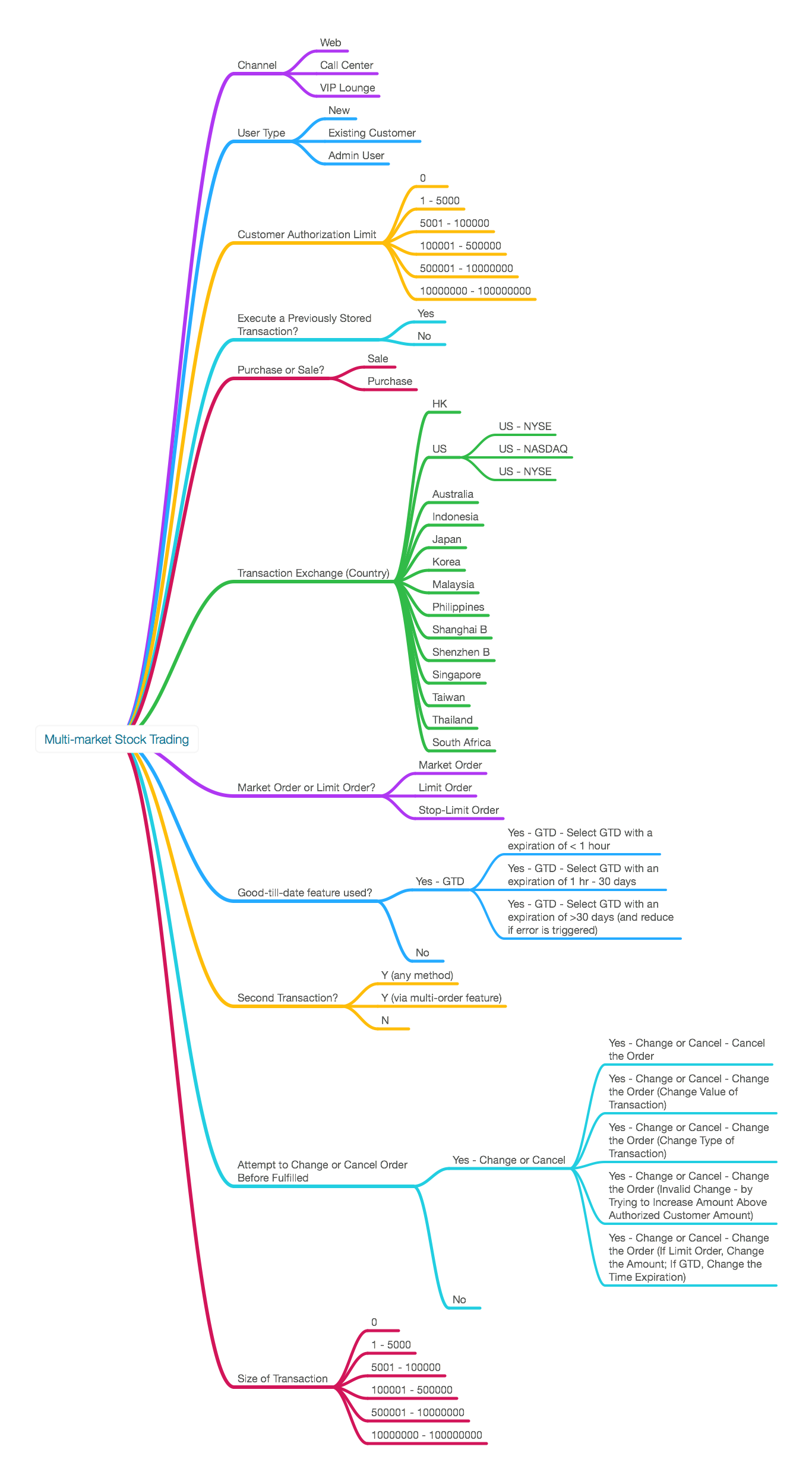