This is an overview and explanation of a set of configuration-based functional tests created in Hexawise. 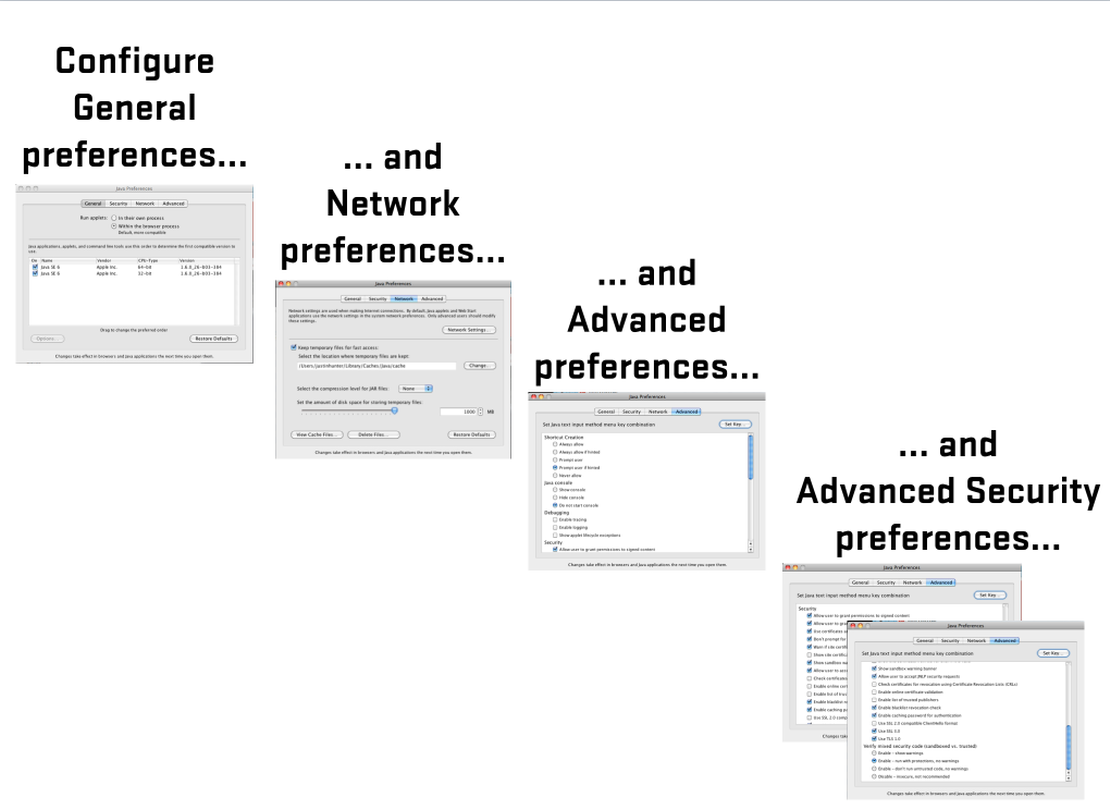 More than 100 trillion possible combinations - that's how many there are once you take into account all of the different configuration options and other test design considerations in this sample plan. In this context, we want to test the various configurations available - with a manageable number of tests.

We know that testing each item in our system once is not sufficient; we know that interactions between the different configuration settings in our system could well cause problems. Similarly, we know that the written requirements document will be incomplete because, realistically, it does not identify all of the potentially troublesome interactions. As thoughtful test designers, we want to be smart about testing for potential problems caused by interactions without going off the deep end and trying to test every possible combination.

Coverage graphs - How to get fact-based insights into "how much testing is enough?"

First, the parameters and values are quite easy to identify. This Java configuration test plan uses the Java preferences available on an Apple MacBook, which are all nicely laid out across a handful of screens located under System Preferences. Normally, a system under test requires a good deal of mental effort to identify the necessary parameters and values. What makes this even easier is the binary nature of most of the options (Enabled, Not enabled).

Second, we weight the values to create tests that, we consider, to be more 'realistic.' This is clear in the number of times "Do not select' appears in any given parameter. For parameters where the option to enable or not enable a particular Java preference, we choose to have two (2) 'Do not select' for every 'Select.' This does increase our overall number of tests (by 7 tests), but the benefit of having more realistic tests outweighs that cost.

Third, the resulting number of tests is quite small even though there are a lot of parameters present in this sample plan.

To be clear, this is represented as an exercise, but clearly many, if not all, of the parameters and values could be discovered by viewing the Java preferences screens. 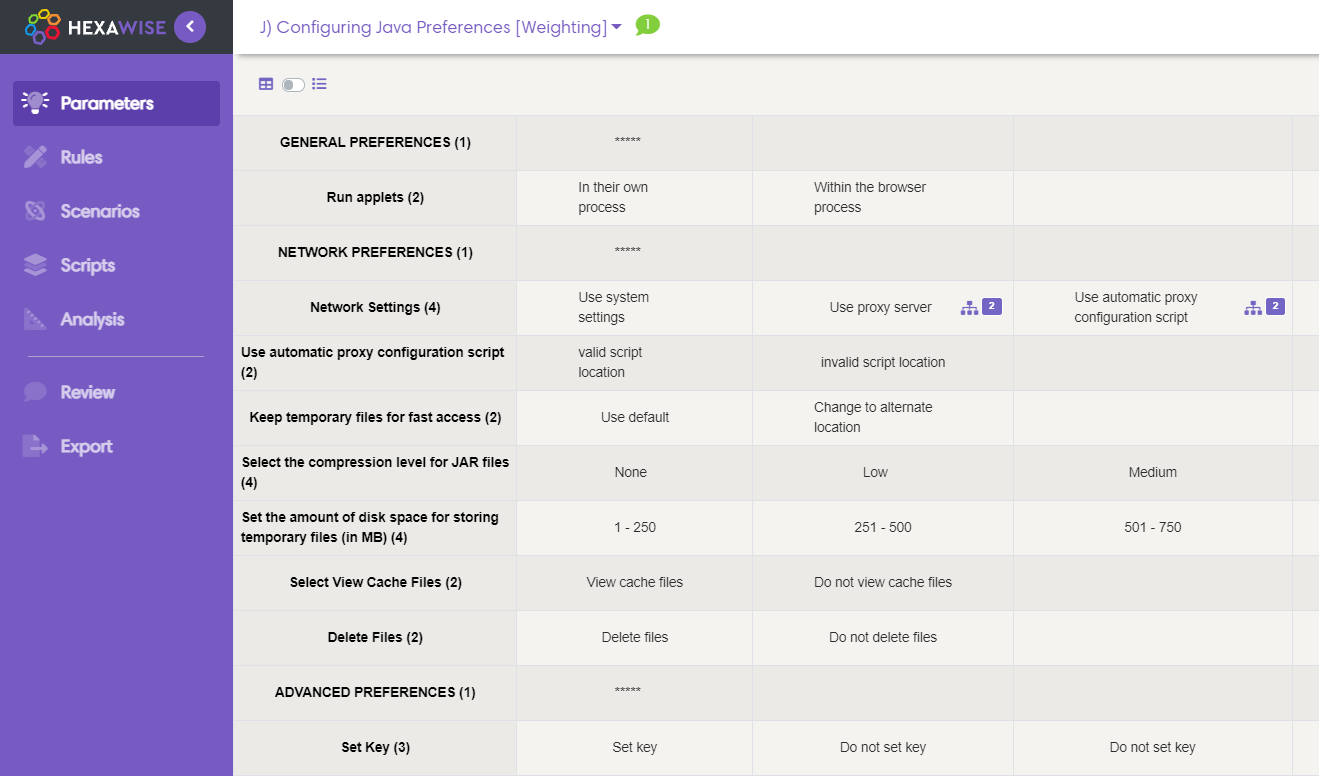 Once we have decided which test conditions are important enough to include in your model (and probably excluded things that will not impact how the system being tested operates such as "time of day for setting preferences" in this example), Hexawise makes it quick and easy to systematically create powerful scenarios that will allow us to maximize our test execution efficiency.

The coverage achieved in the 31 tests above is known as pairwise testing coverage (or 2-way interaction coverage). Hexawise-generated pairwise tests have been proven in many contexts and types of testing to deliver large thoroughness and efficiency benefits compared to sets of hand-selected scenarios.

Hexawise gives test designers control over how thorough they want their testing coverage to be. As in this case, Hexawise allows testers to quickly generate dozens, hundreds, or thousands of tests using Hexawise's "coverage dial." If you have very little time for test execution, you would find those 31 pairwise tests to be dramatically more thorough than a similar number of tests you might select by hand. If you had a lot more time for testing, you could quickly generate a set of even more thorough 3-way tests (as shown in the screen shot immediately below). 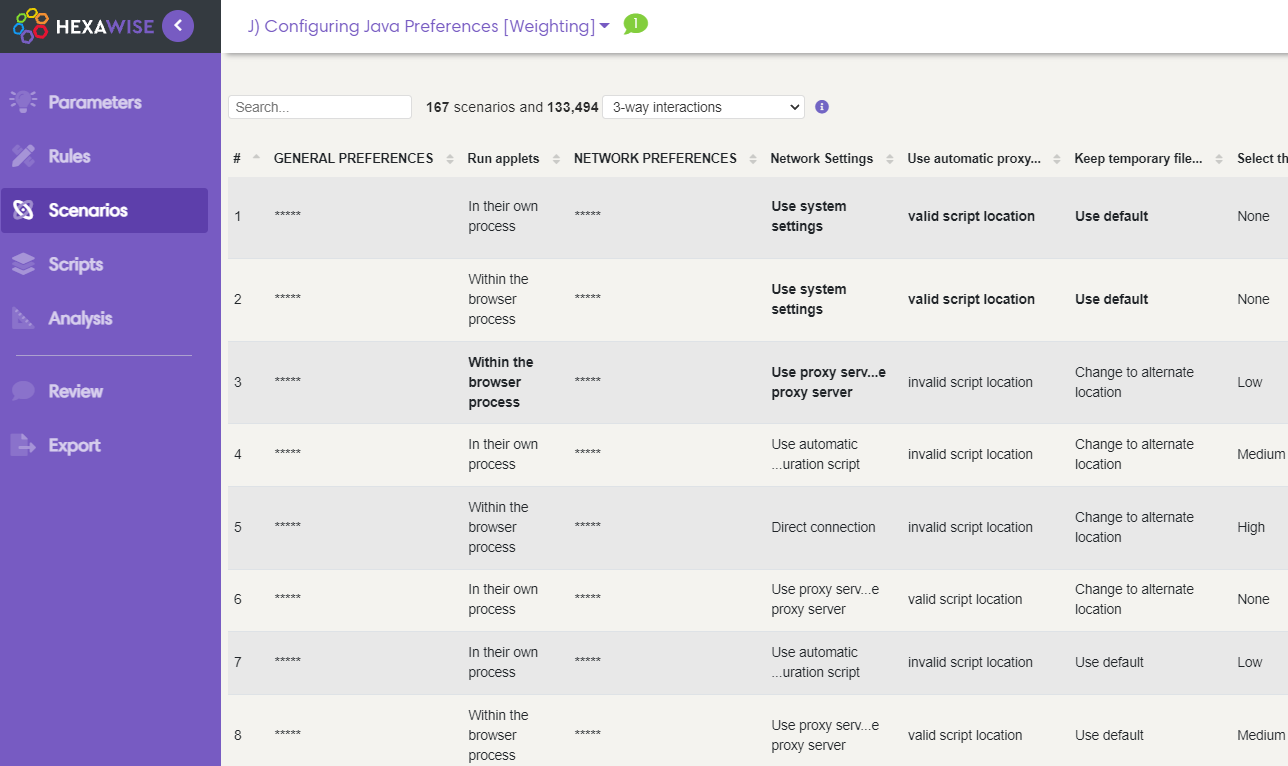 Hexawise generates and displays this extremely thorough set of 167 3-way tests to you within a few seconds.  This set of 3-way coverage strength tests would be dramatically more thorough than typical sets of manually selected test scenarios typically used by large global firms when they test their systems.

If a tester spent a few days trying to select tests by hand that achieved 100% coverage of every single possible "triplet" of Values (such as, e.g., (i) running applets in their own process, (ii) while the Java console is hidden, and (iii) online certificate validations are not enabled), the following results would probably occur:

We can force specific combinations to appear in scenarios 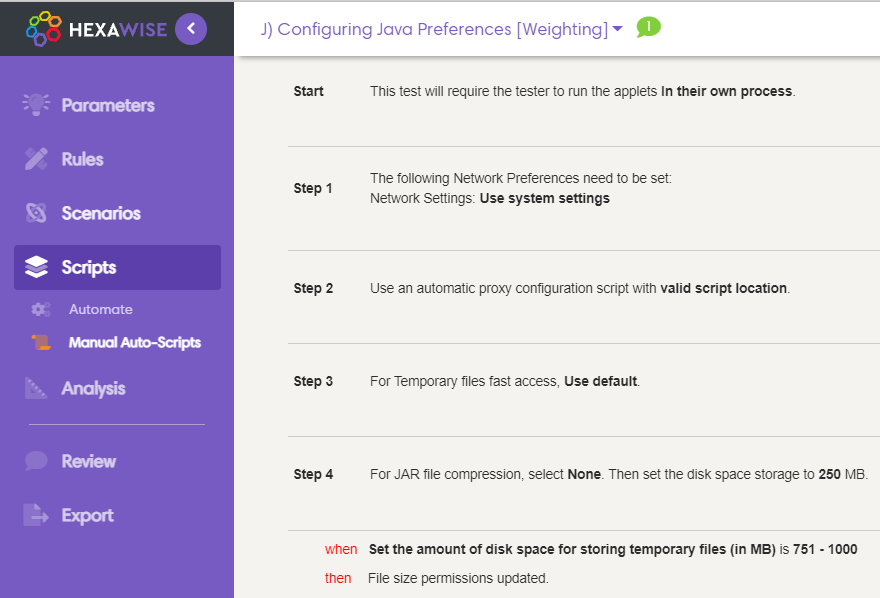 We document a single test script in detail from the beginning to end. As we do so, we indicate where our variables (such as, "Network Settings," and "Set Key," and "Enable online certificate validation") are in each sentence. That's it. As soon as we document a single test in this way, we're ready to export every one of our tests.

From there, Hexawise automatically modifies the single template test script we create and inserts the appropriate Values for every test in your plan (whether our plan has 10 tests or 1,000).

We can even add simple Expected Results to our detailed scripts 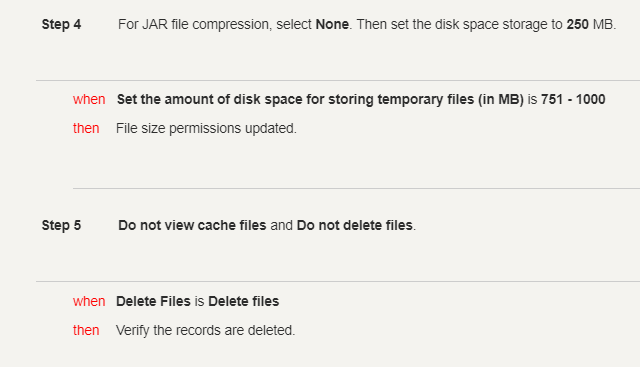 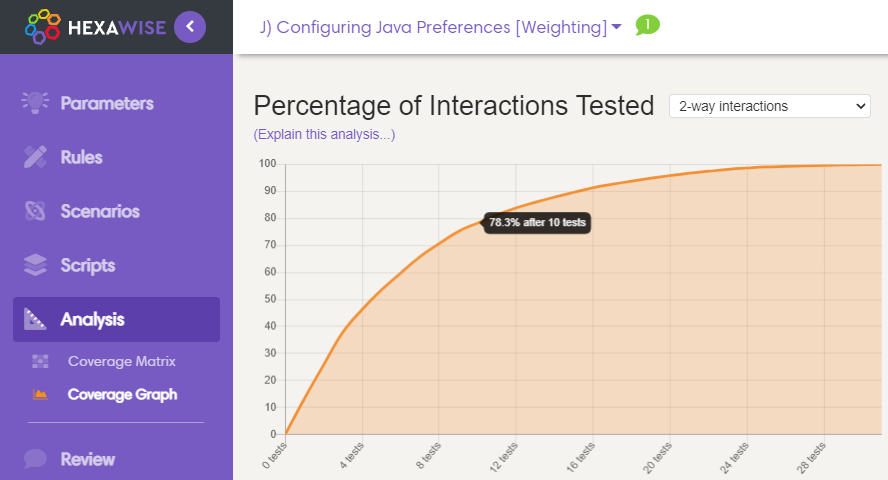 We know we would achieve 78.3% coverage of the pairs in the system if we stopped testing after test number 10, but which specific coverage gaps would exist at that point? See the matrix chart below for that information. 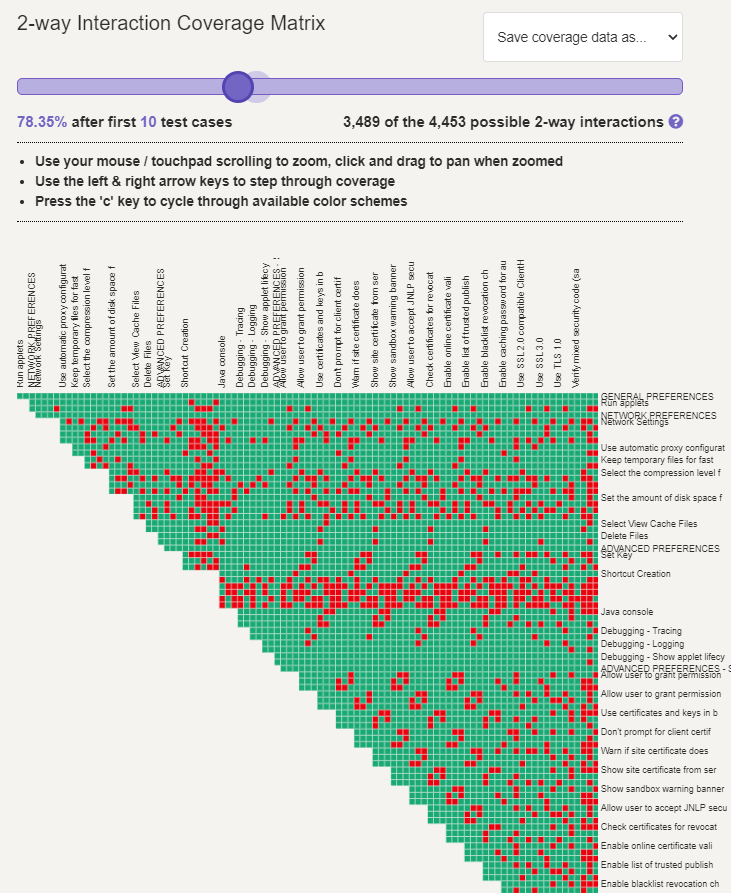 For example, in the first 10 tests, there is no scenario that includes both (a) Network Settings - Use system settings together with (b) Use automatic proxy configuration script - invalid script location.

Hexawise-generated tests will fill as many coverage gaps as possible with each test. In contrast, hand-selected tests that testers might select themselves would leave far more gaps in coverage. 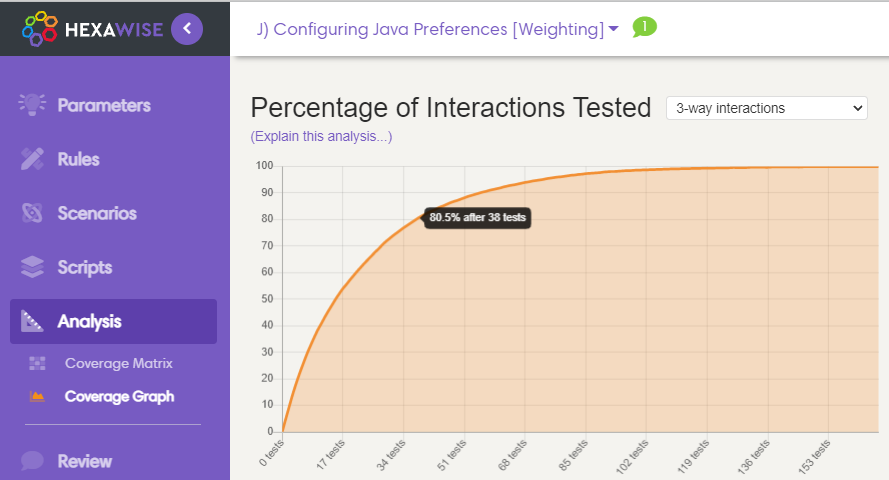 This chart provides teams with insights about how much testing is enough? And it clearly shows that the amount of learning / amount of coverage that would be gained from executing the tests at the beginning of the test set is much higher than the the learning and coverage gained by executing those tests toward the end of the test set. As explained here, this type of diminishing marginal return is very often the case with scientifically optimized test sets such as these. 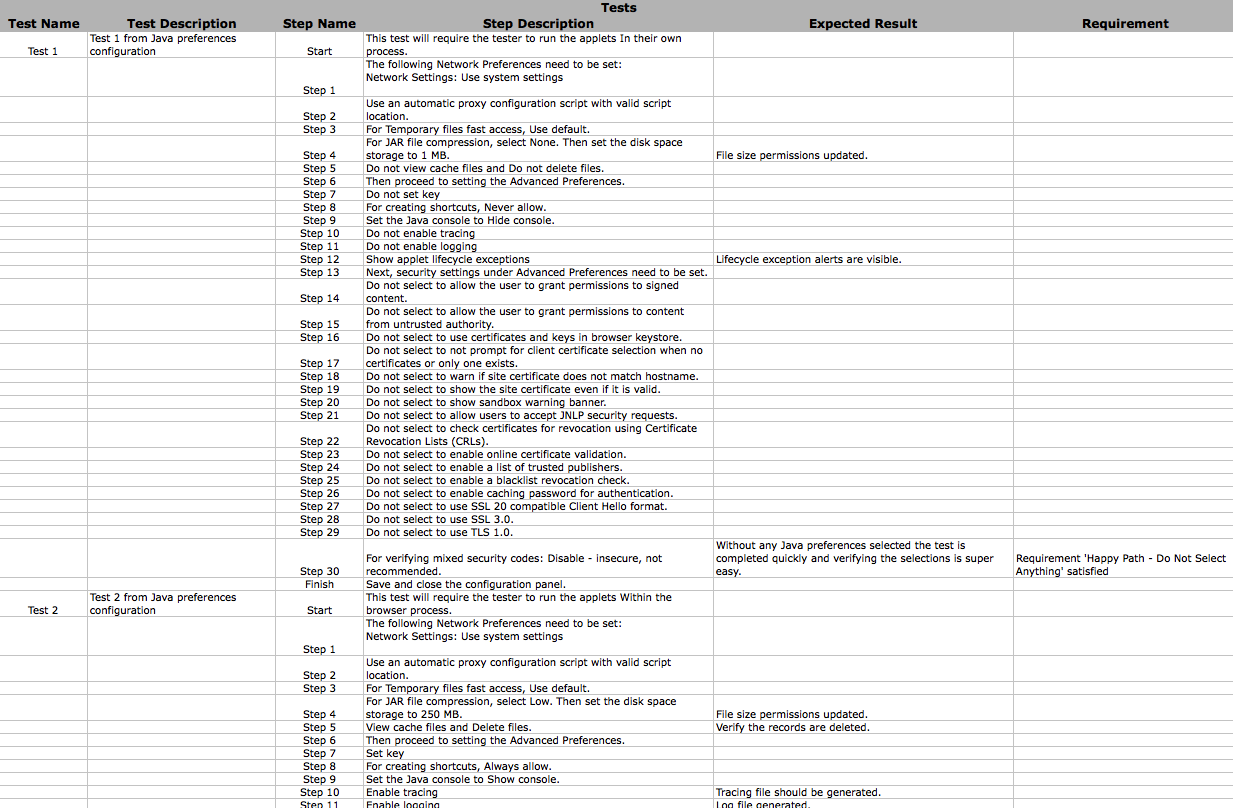