This is an overview and explanation of a set of functional tests created in the Hexawise. This plan is based on the example in Elfriede Dustin's article "Orthogonally Speaking," available here.

In testing the credit card checkout functionality, there are five different test conditions included in each test scenario. Even in this over-simplified example, there are close to 1,000 possible scenarios. In this context, we want to test this credit card functionality relatively thoroughly - with a manageable number of tests.

Value Expansions - How can I maximize variation without increasing the number of my tests? 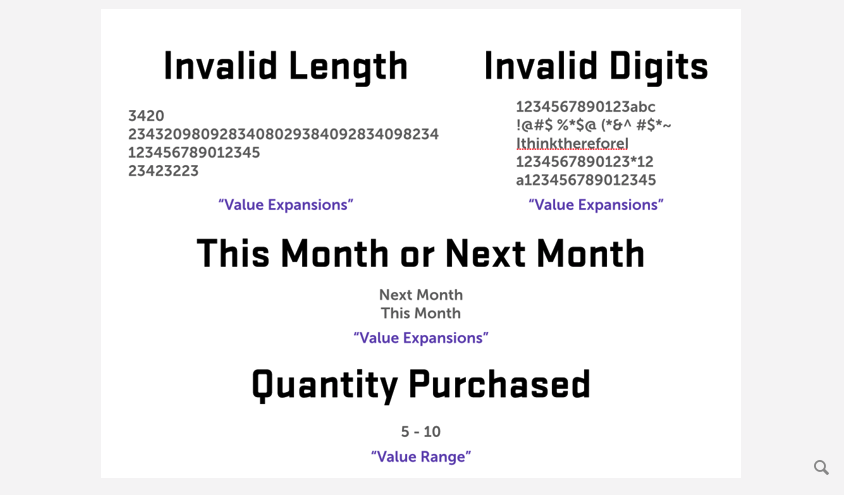 Equivalence Classes, with particular focus on Value Expansions, are used in this plan. Value Expansions are a great way to incorporate equivalence classes in your plan without increasing the number of tests generated. It is worth pointing out that there are several strategies for including equivalence classes in your test plans. The choice of strategy used has subtle impacts on how the tests are created and written.

Once we have decided which test conditions are important enough to include in this model (and excluded things - like 'What time of day is the purchase made?' - that will not impact how the system being tested operates), Hexawise makes it quick and easy to systematically create powerful scenarios that will allow us to maximize our test execution efficiency.

The coverage achieved in the 23 tests above is known as pairwise testing coverage (or 2-way interaction coverage). Hexawise-generated pairwise tests have been proven in many contexts and types of testing to deliver large thoroughness and efficiency benefits compared to sets of hand-selected scenarios.

Hexawise gives test designers control over how thorough they want their testing coverage to be. As in this case, Hexawise allows testers to quickly generate dozens, hundreds, or thousands of tests using Hexawise's "coverage dial." If you have very little time for test execution, you would find those 23 pairwise tests to be dramatically more thorough than a similar number of tests you might select by hand. If you had a lot more time for testing, you could quickly generate a set of even more thorough 3-way tests (as shown in the screen shot immediately below). 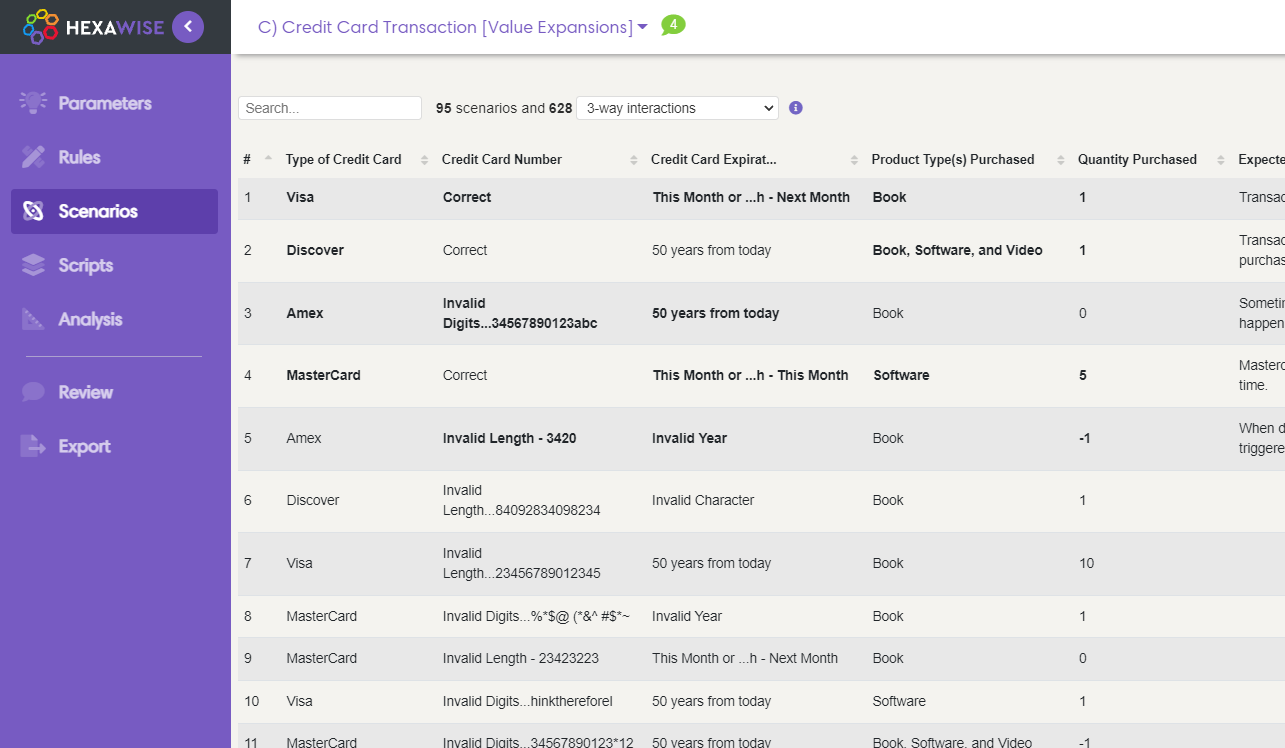 Hexawise generates and displays this extremely thorough set of 95 three-way tests to you within a few seconds. This set of 3-way coverage strength tests would be dramatically more thorough than typical sets of manually selected test scenarios typically used by large global firms when they test their systems.

If a tester spent a few days trying to select tests by hand that achieved 100% coverage of every single possible triplet of Values (such as, e.g., (i) Amex card, and (ii) invalid credit card number length, and (iii) purchasing a Book, Software, and Video), the following results would probably occur: 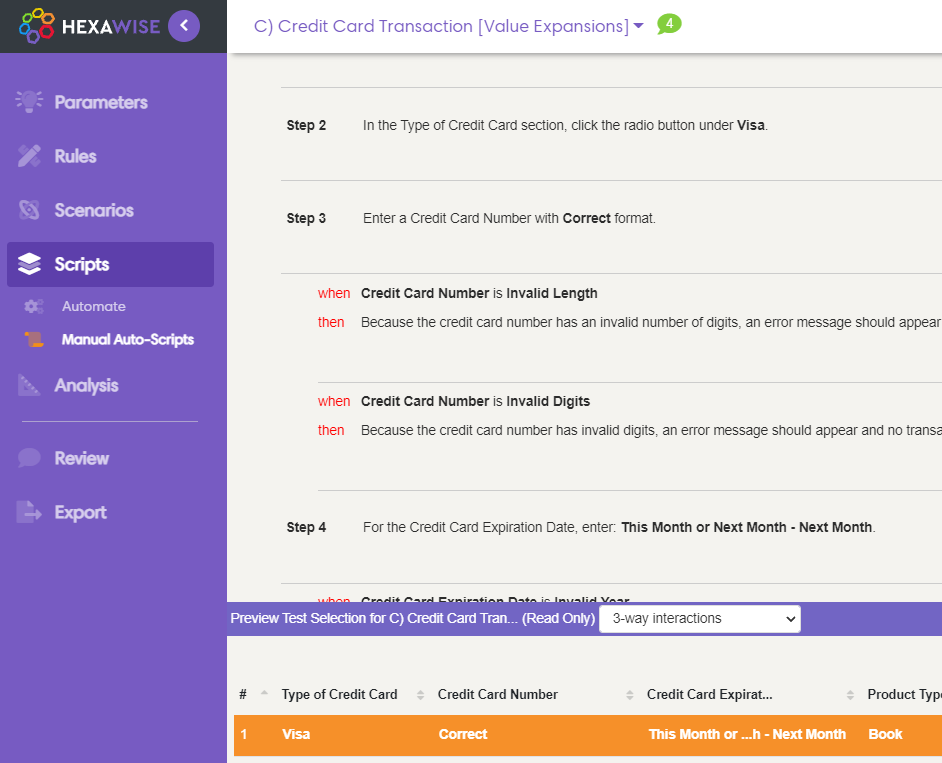 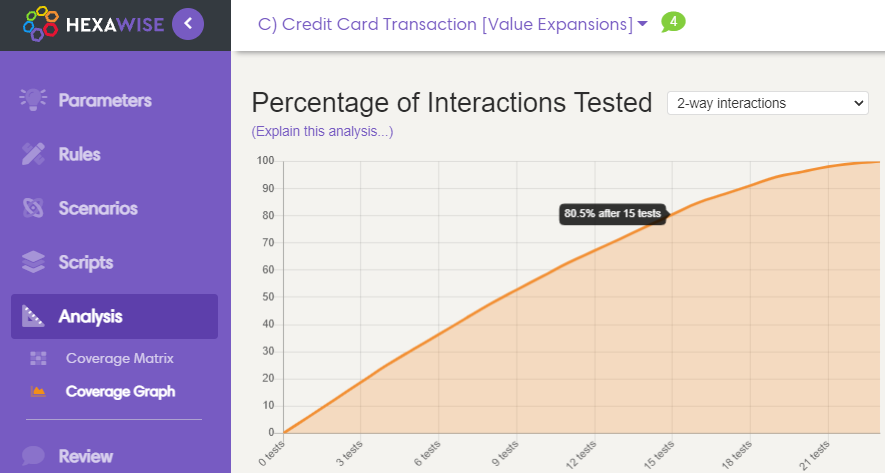 We know we would achieve ~81% coverage of the pairs in the system if we stopped testing after test number 15, but which specific coverage gaps would exist at that point? See the matrix chart below for that information. 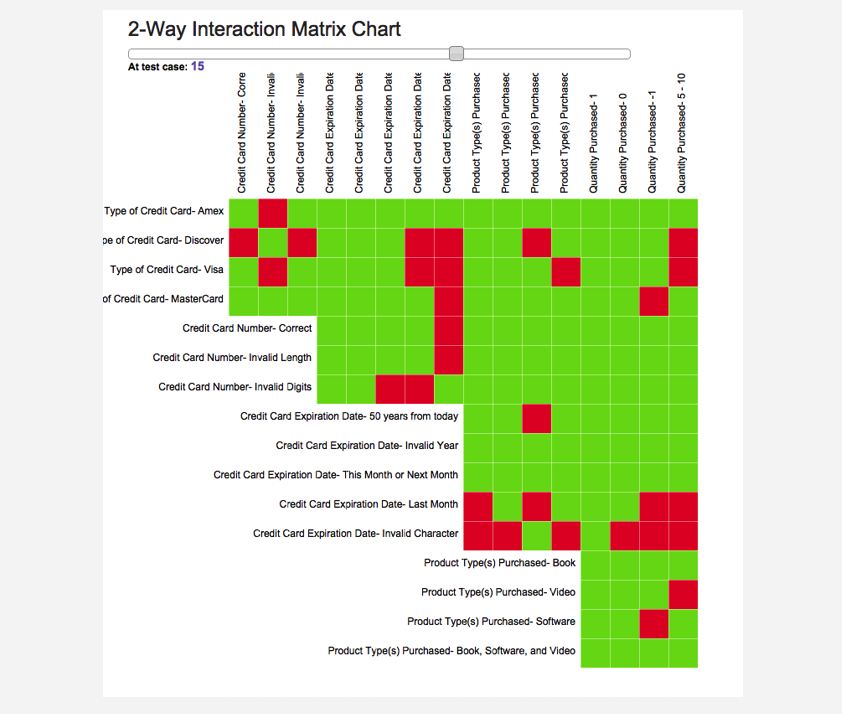 The matrix chart above shows every specific pair of values that would not yet tested together if we were to stop testing after test number 15.

For example, in the first 15 tests, there is no scenario that includes both (a) "Type of Credit Card - Discover" together with (b) "Credit Card Number - Correct." 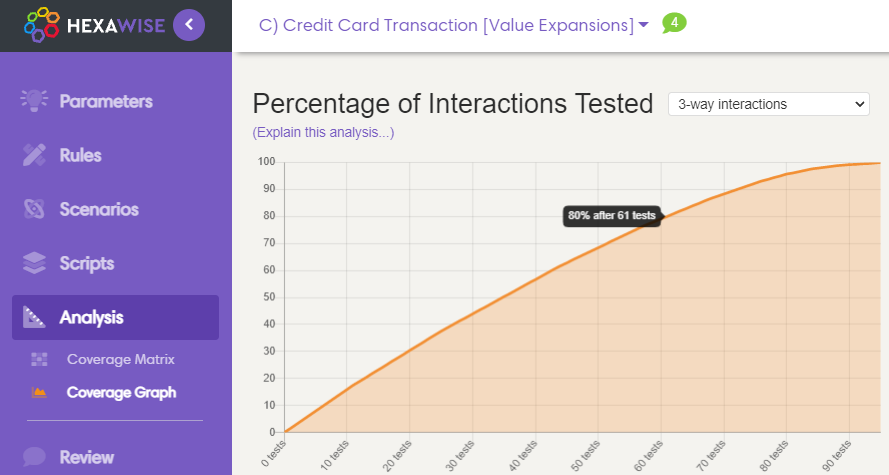 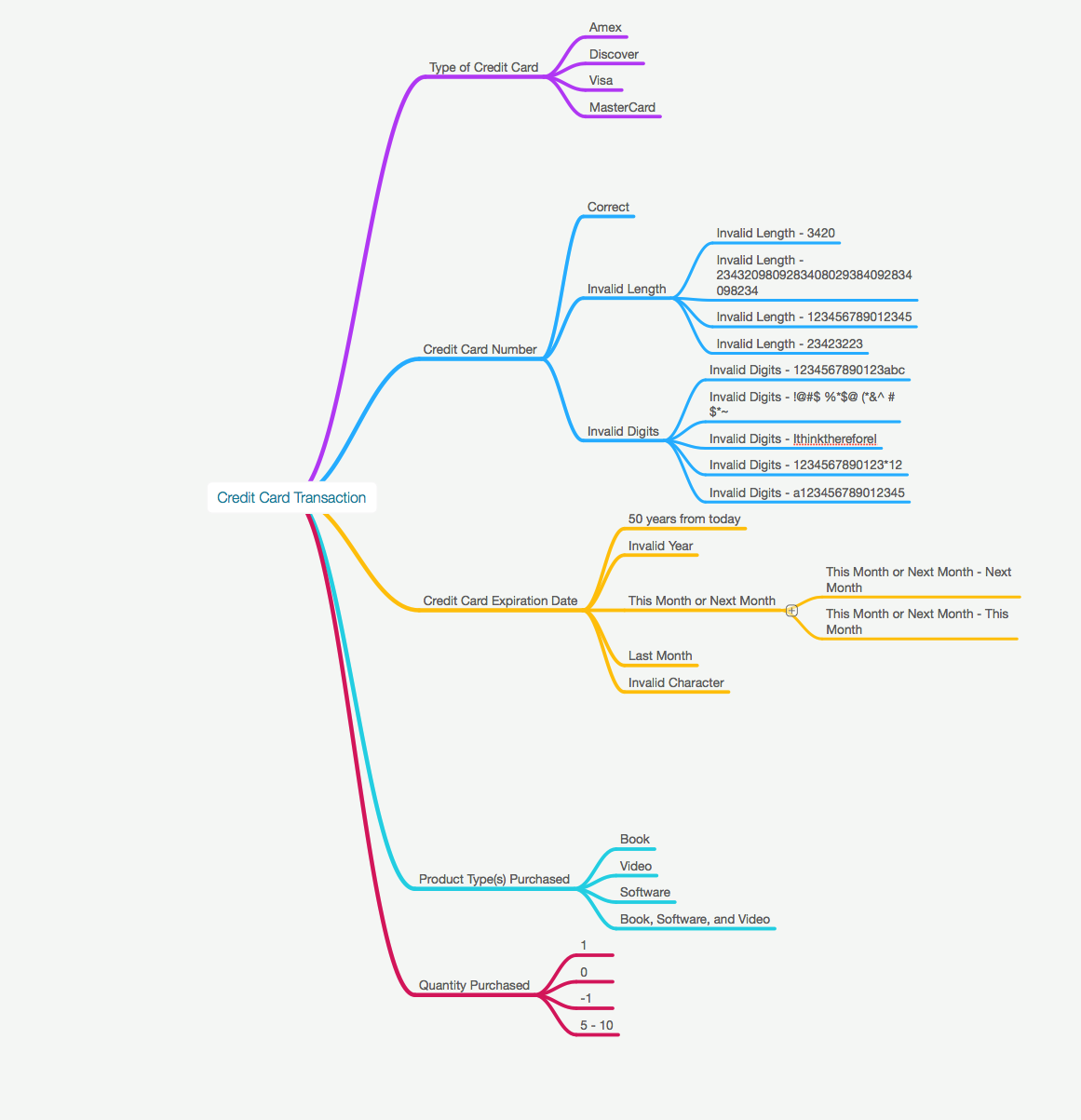 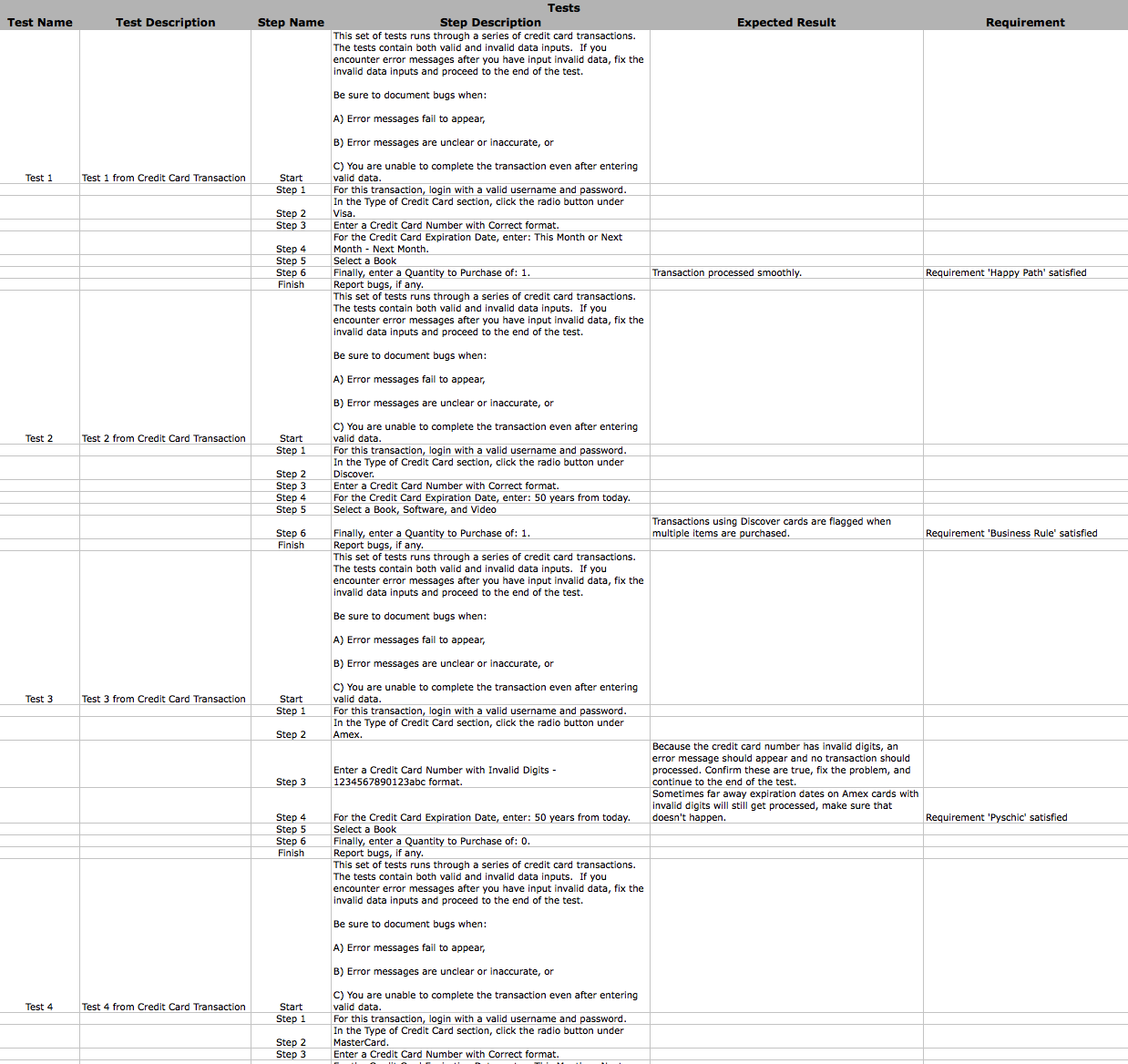 Previous: Reasons for "Expert/Guru" Classification
Next: 7. Configuring Java Preferences
Did this answer your question?