Learn how an optimized set of scenarios for an insurance application is effeciently designed in Hexawise. 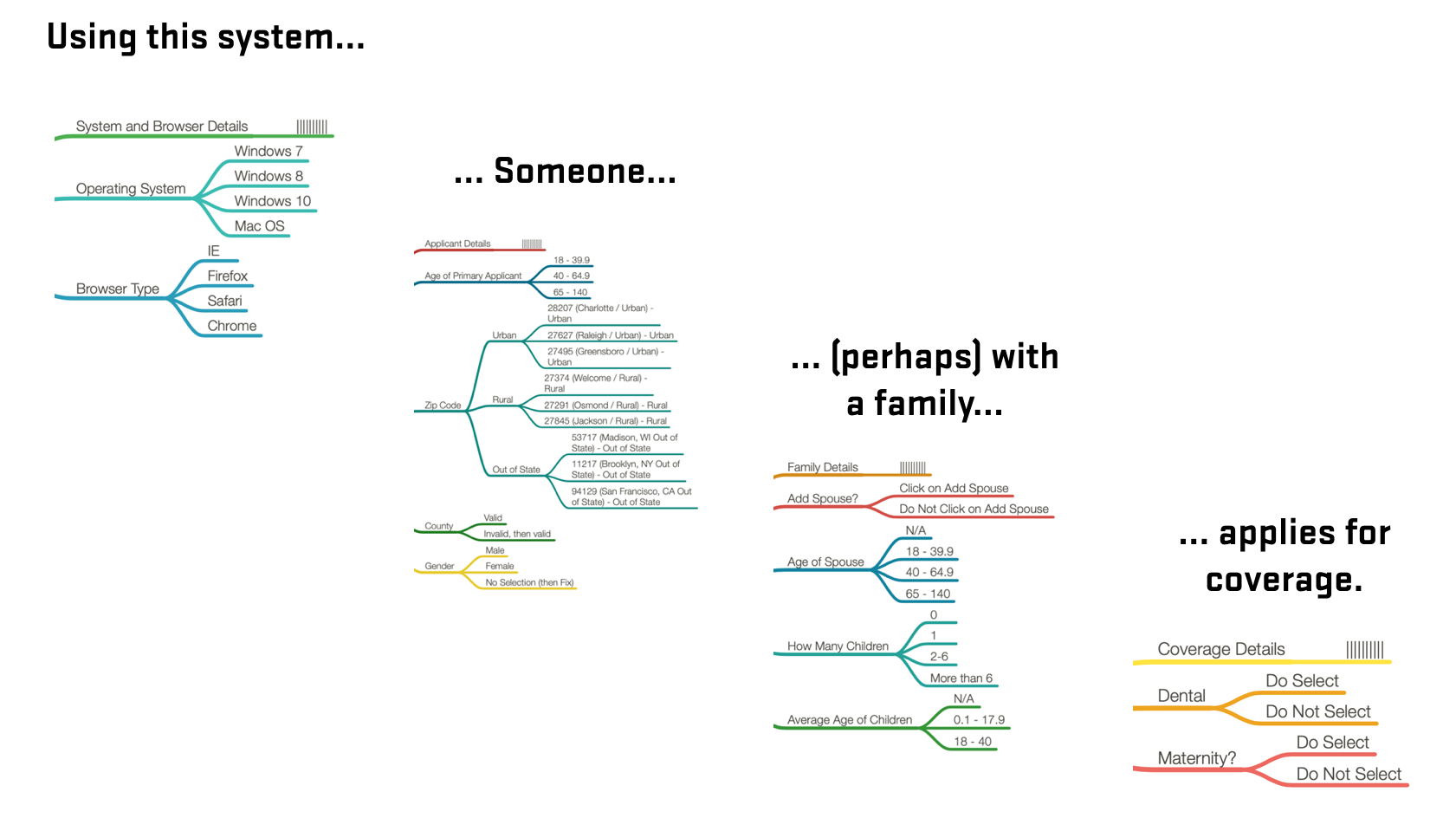 Each time someone applies for insurance, thirteen different test conditions are included in the test scenario. Even in this over-simplified example, there are over 300,000 possible scenarios. In this context, we want to test this loan application process relatively thoroughly - with a manageable number of tests.

Bound Pairs - How to prevent certain combinations from appearing in your set of tests, faster

We might have multiple values that are invalid with one particular value. If that is the case, marking many, many invalid pairs can be time consuming (and frustrating). Hexawise has a shortcut with its Bound Pair feature.

In this plan, we might have a scenario where the applicant does not have a spouse. If that is the case, we want to ensure that the scenario does not include an age for a spouse that does not exist. Based on discussions about what age ranges would be necessary for testing, we have 3 particular ranges for spouses. In order to have scenarios that do not include a spouse, we add a fourth value, 'N/A' to the Age of Spouse parameter. Now, we could invalidate the three options of ages with not adding a spouse, or we could use the Bound Pair feature.

You will also note that when there is a scenario of '0' children added in the insurance quotation, we have should not have average ages of the children present in our scenario. So, similarly, we marry the values of 'How Many Children - 0' with 'Average Age of Children - N/A.'

For more on creating Bound Pairs, please see the help file: How do I prevent certain combinations from appearing using the "Bound Pair" feature?

Sometimes it is necessary to identify a particular combination as impossible to even test for and remove it from the test cases that Hexawise creates. If you are using a Windows 7 machine, for example, it is not possible to use any version of the browser Safari. For that particular case, we would use the Invalid Pair feature.

Who is asking for the insurance quote and what characteristics do they have that will impact how the System Under Test behaves? In particular... 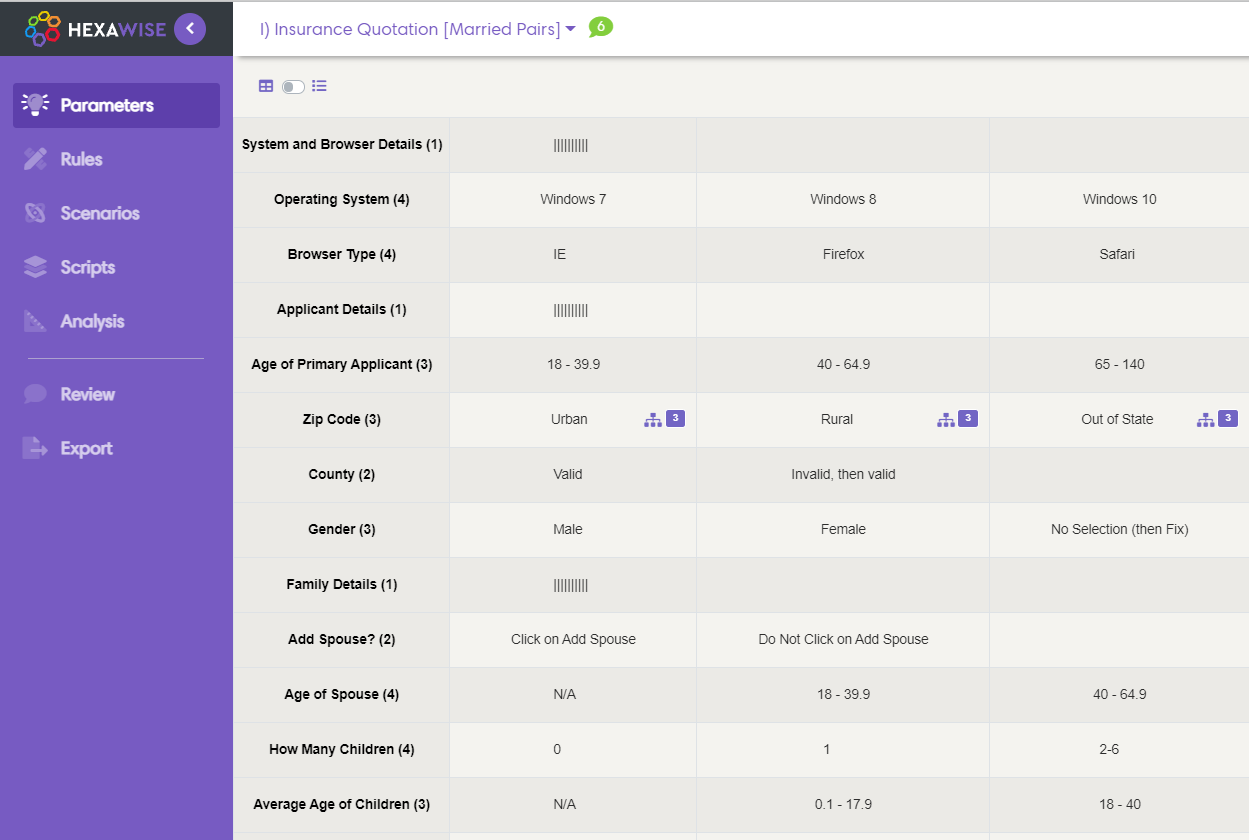 Once we have decided which test conditions are important enough to include in this model (and excluded things - like "What time of day do they get the quote?" in this example - that will not impact how the system being tested operates), Hexawise makes it quick and easy to systematically create powerful scenarios that will allow us to maximize our test execution efficiency.

The coverage achieved in the 24 tests above is known as pairwise testing coverage (or 2-way interaction coverage). Hexawise-generated pairwise tests have been proven in many contexts and types of testing to deliver large thoroughness and efficiency benefits compared to sets of hand-selected scenarios.

Hexawise gives test designers control over how thorough they want their testing coverage to be. As in this case, Hexawise allows testers to quickly generate dozens, hundreds, or thousands of tests using Hexawise's "coverage dial." If you have very little time for test execution, you would find those 24 pairwise tests to be dramatically more thorough than a similar number of tests you might select by hand. If you had a lot more time for testing, you could quickly generate a set of even more thorough 3-way tests (as shown in the screen shot immediately below). 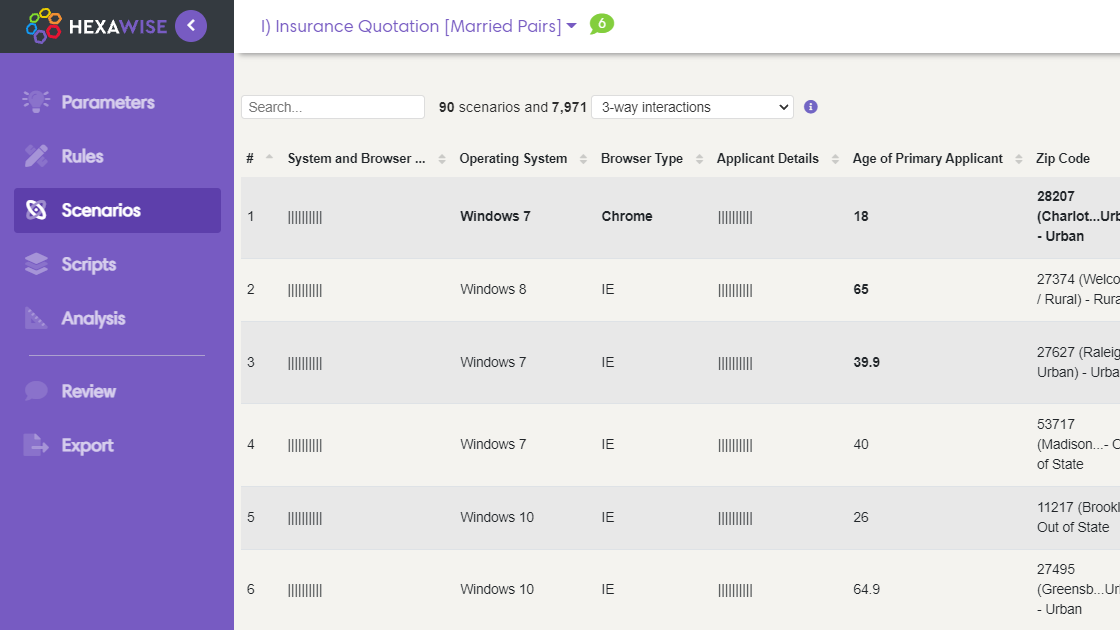 Hexawise generates and displays this extremely thorough set of 90 three-way tests to you within a few seconds.  This set of 3-way coverage strength tests would be dramatically more thorough than typical sets of manually selected test scenarios typically used by large global firms when they test their systems.

If a tester spent a few days trying to select tests by hand that achieved 100% coverage of every single possible "triplet" of Values (such as, e.g., (i) 18 year old applicant, and (ii) Without a Spouse, and (iii) has more than 6 children), the following results would probably occur: 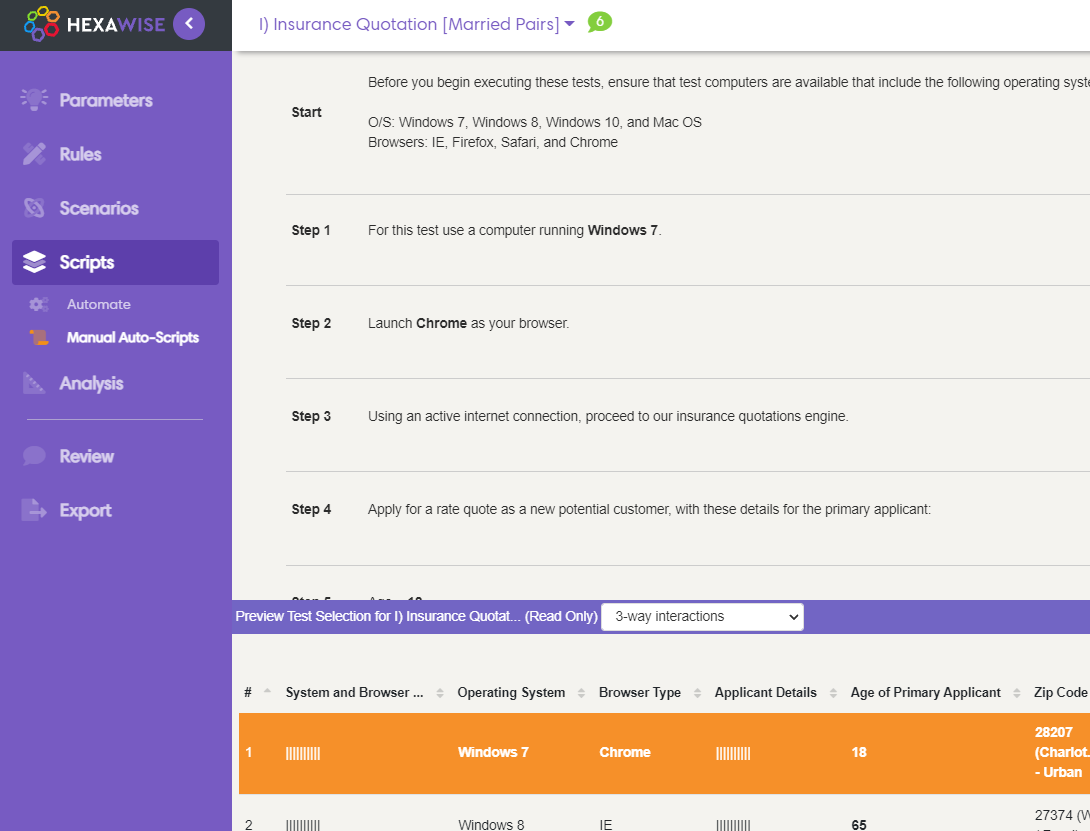 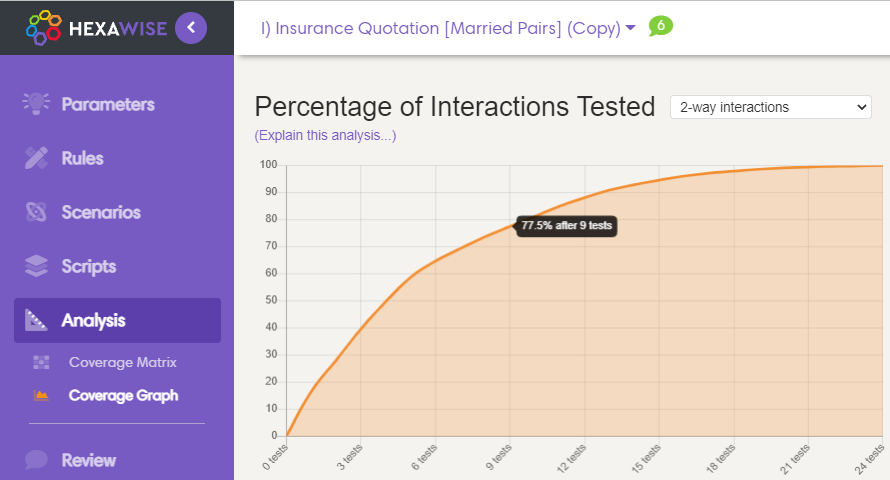 We know we would achieve 77.5% coverage of the pairs in the system if we stopped testing after test number 9, but which specific coverage gaps would exist at that point? See the matrix chart below for that information. 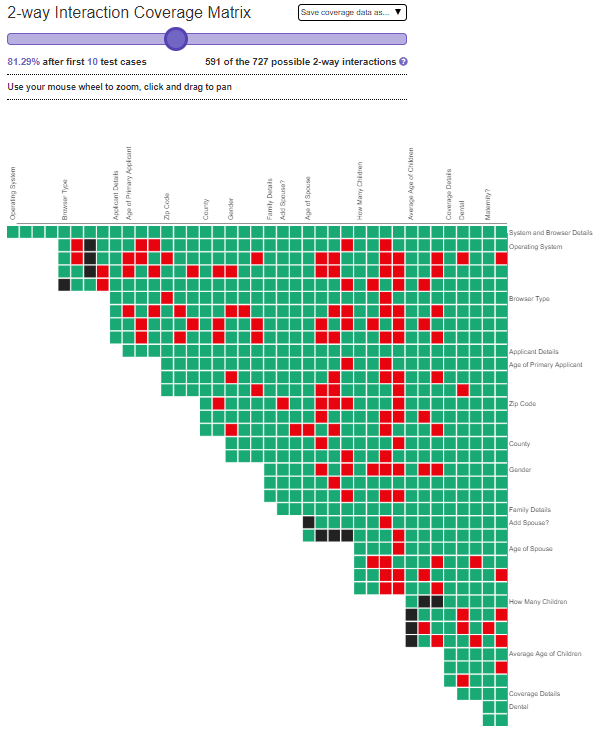 You may notice that there are several black boxes in the Matrix Chart above. Those black boxes represent the invalid pairs created via the Invalid Pairs or Married Pairs features. We mark them as black to indicate that Hexawise will not pair them together, whereas the red boxes are those pairs that have yet to be covered. 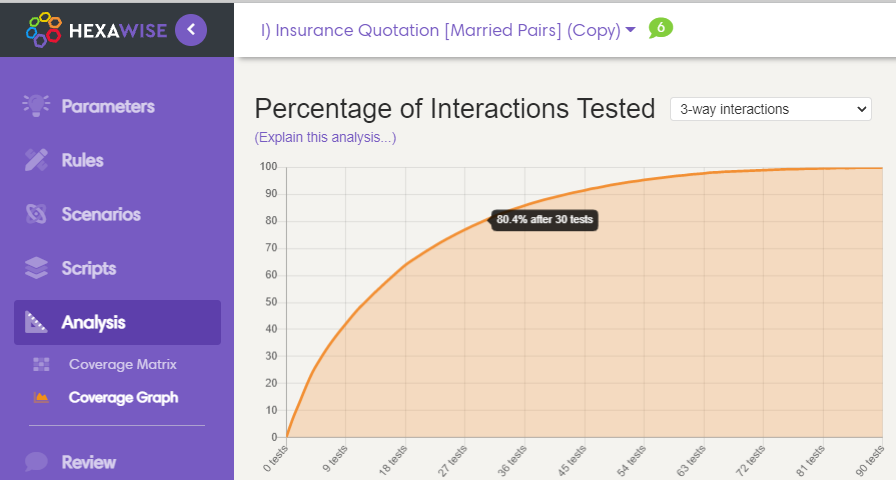 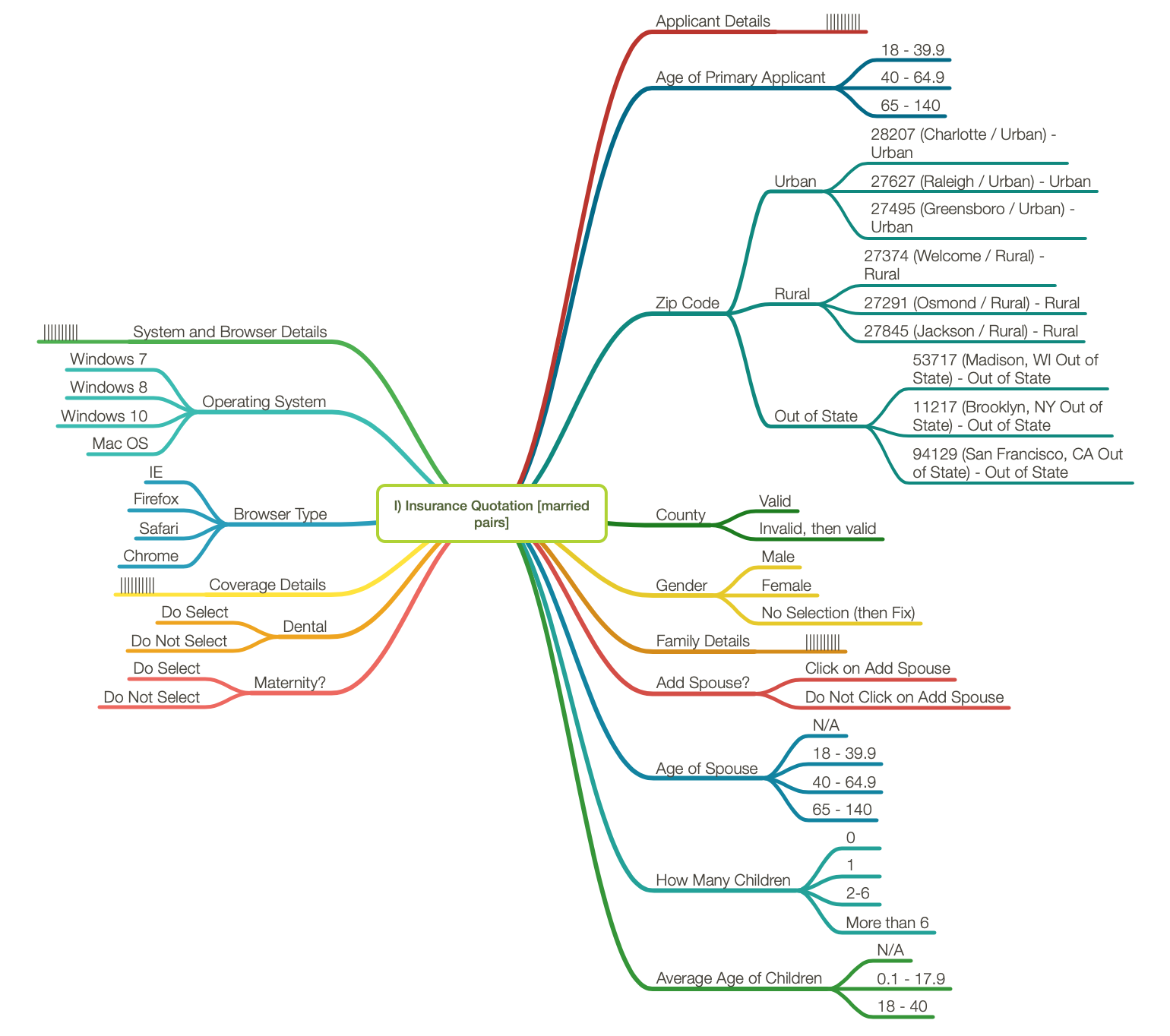 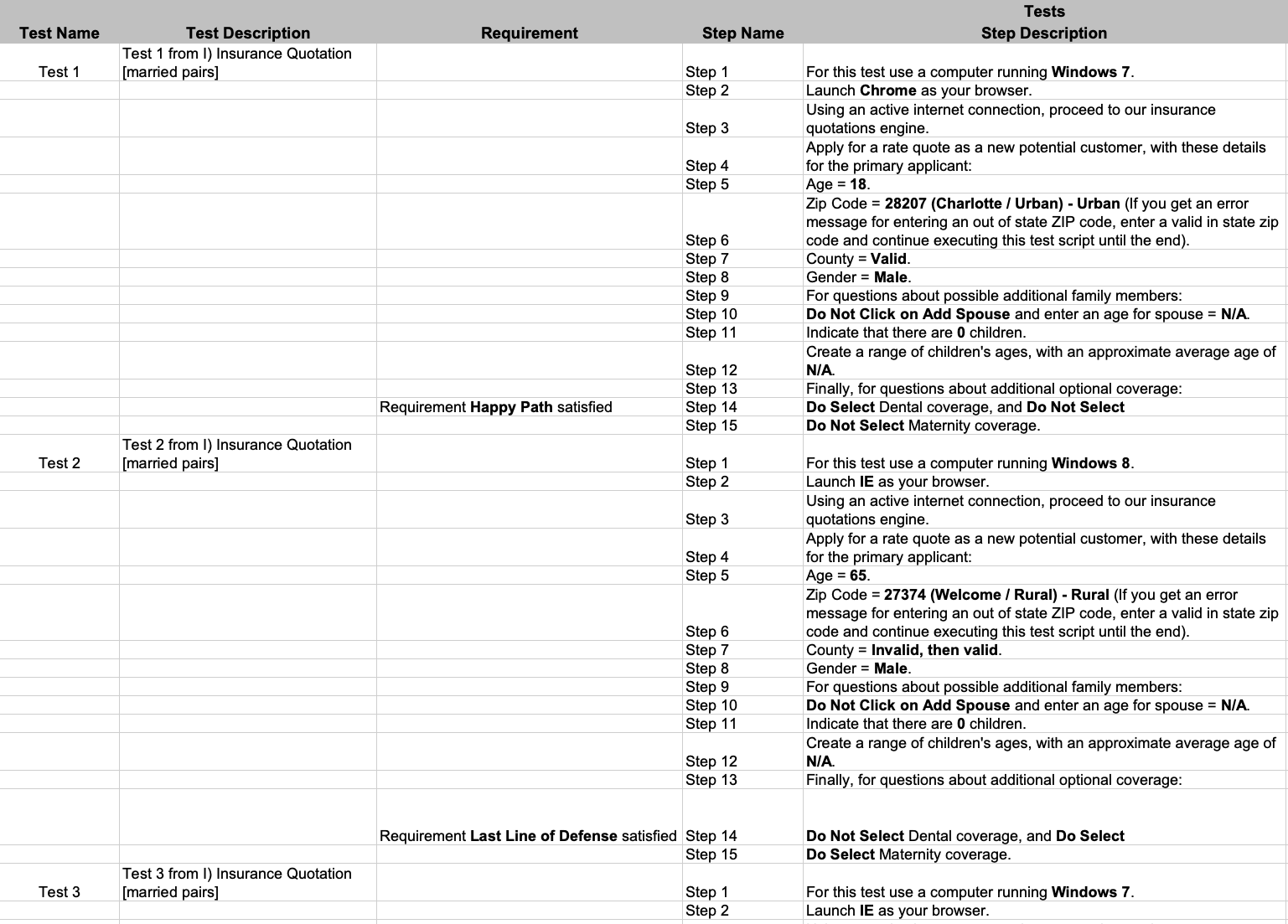