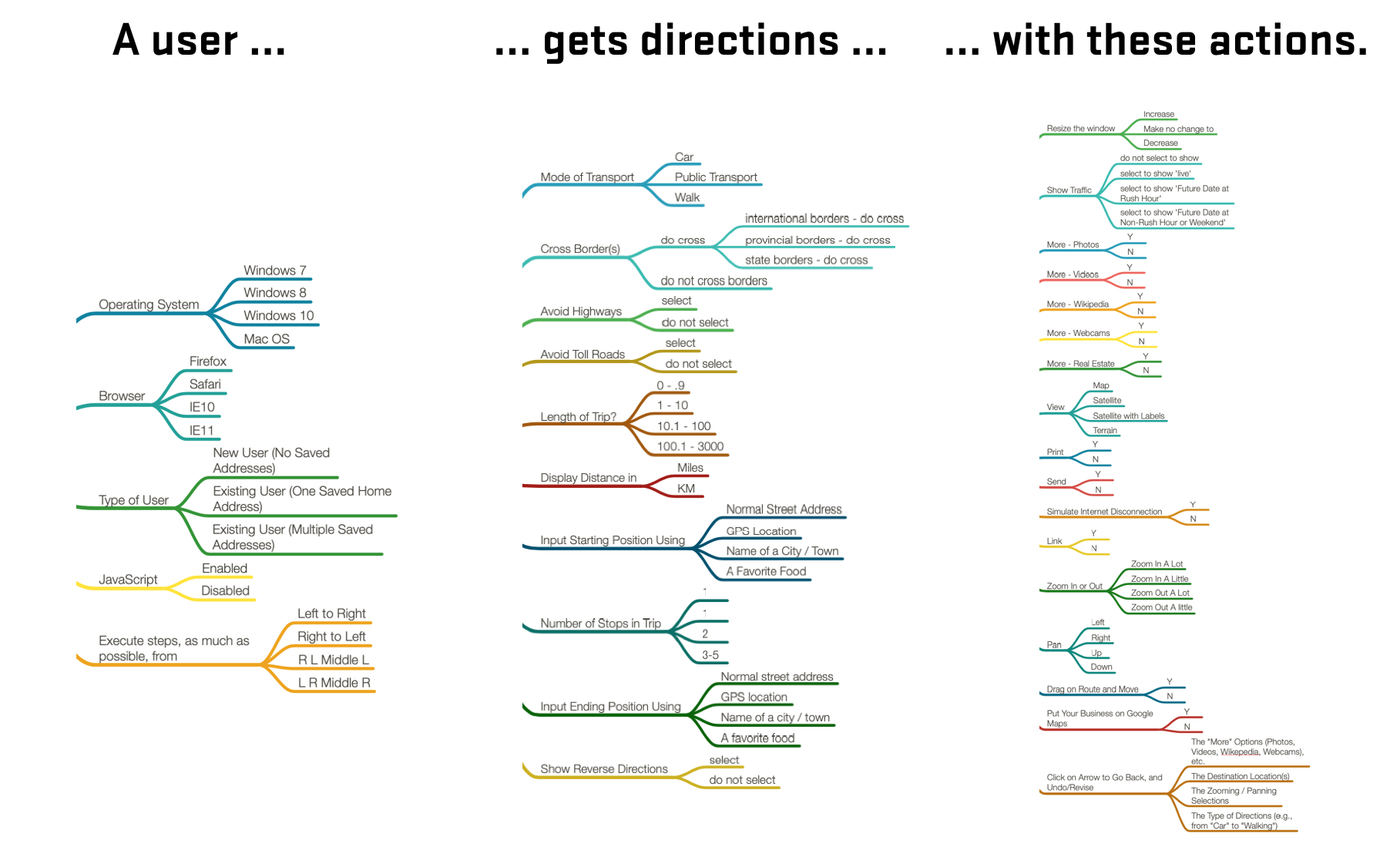 Each time someone gets directions, thirty-three different test conditions are included in the test scenario. This produces close to 60 trillion possible scenarios. In this context, we want to test this online map direction process relatively thoroughly - with a manageable number of tests.

We know that testing each item in our system once is not sufficient; we know that interactions between the different things in our system (such as a particular browser type interacting with input methods, for example) could well cause problems. Similarly, we know that the written requirements document will be incomplete and will not identify all of those potentially troublesome interactions for us. As thoughtful test designers, we want to be smart and systematic about testing for potential problems caused by interactions without going off the deep end and trying to test every possible combination.

Invalid Pairs - How to prevent 'impossible to test for' scenarios from appearing in your set of tests.

Matrix Charts - How to tell which exact coverage gaps would exist in our testing gif we were to stop executing tests at any point in time before the final Hexawise-generated test.

Sometimes it is necessary to identify a particular combination as impossible to even test for and remove it from the scenarios that Hexawise creates. If you are using a Windows 7 machine, for example, it is not possible to use any version of the Safari browser.

Marking a pair of values (such as Windows 7 and Safari) as invalid will prevent it from appearing in your Hexawise-generated tests.

For more on creating Invalid Pairs, please see the help file: How do I create an "Invalid Pair" to prevent impossible to test for Values from appearing together?

Who is getting directions and what characteristics do they have that will impact how the System Under Test behaves? In particular... 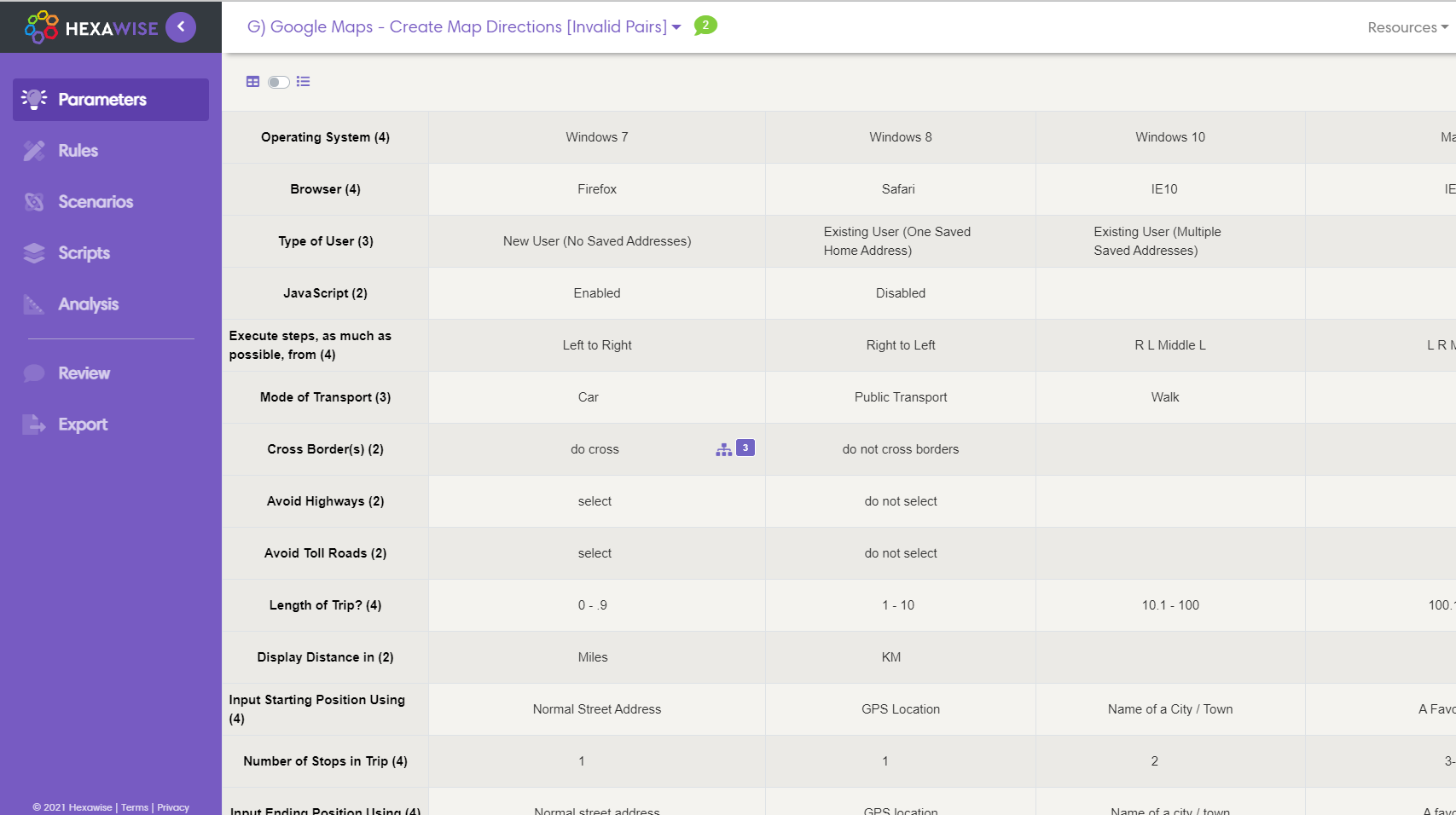 Once we have decided which test conditions are important enough to include in this model (and excluded things - like 'Should they try interplanetary directions?' - that will not impact how the system being tested operates), Hexawise makes it quick and easy to systematically create powerful tests that will allow us to maximize our test execution efficiency. 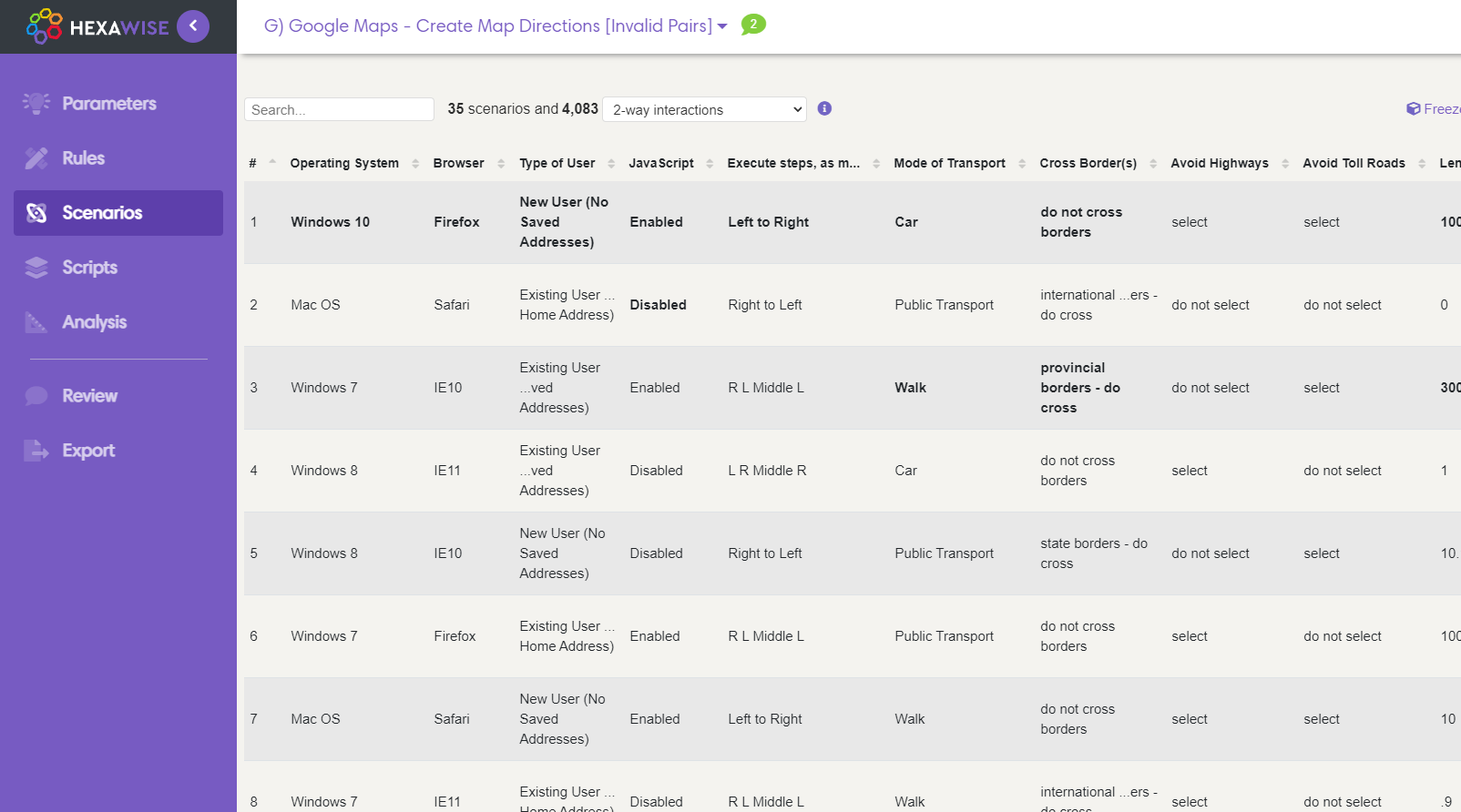 The coverage achieved in the 35 tests above is known as pairwise testing coverage (or 2-way interaction coverage). Hexawise-generated pairwise tests have been proven in many contexts and types of testing to deliver large thoroughness and efficiency benefits compared to sets of hand-selected scenarios.

Hexawise gives test designers control over how thorough they want their testing coverage to be. As in this case, Hexawise allows testers to quickly generate dozens, hundreds, or thousands of tests using Hexawise's "coverage dial." If you have very little time for test execution, you would find those 35 pairwise tests to be dramatically more thorough than a similar number of tests you might select by hand. If you had a lot more time for testing, you could quickly generate a set of even more thorough 3-way tests (as shown in the screen shot immediately below). 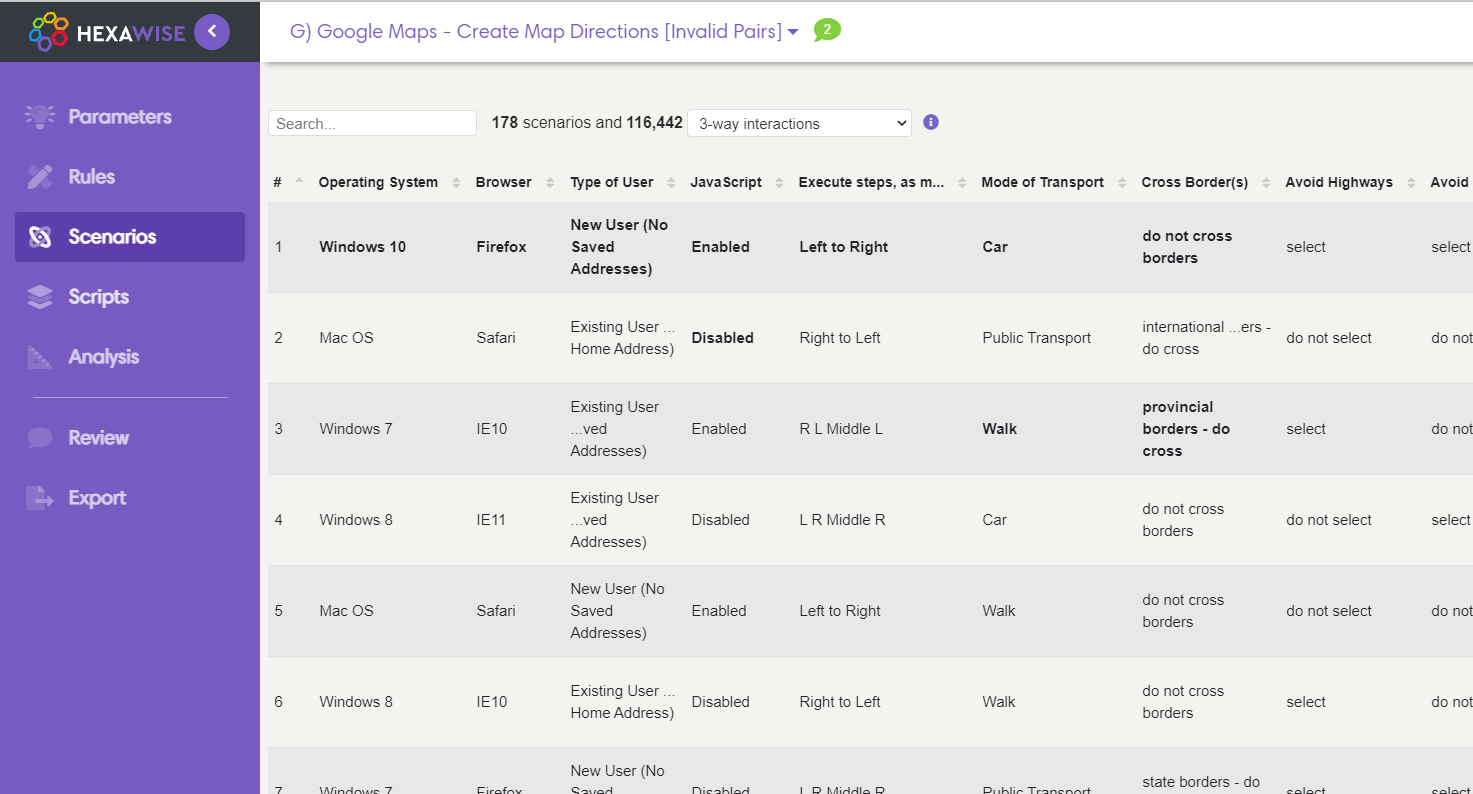 In the picture above, we see the pairings for our Operating System and Browser parameters. As you can see, none of the pairs we marked as invalid have made it into our tests.

We can force specific scenarios to appear in tests 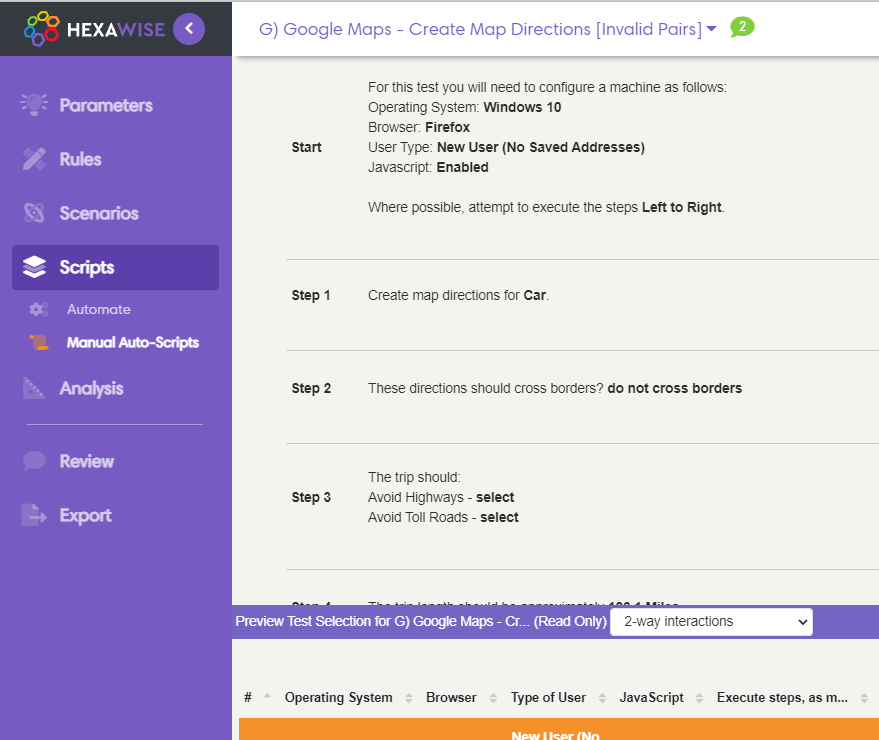 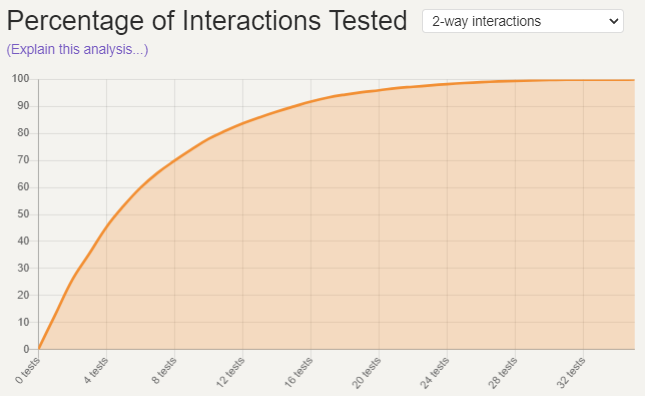 We know we would achieve 81.0% coverage of the pairs in the system if we stopped testing after test number 11, but which specific coverage gaps would exist at that point? See the matrix chart below for that information. 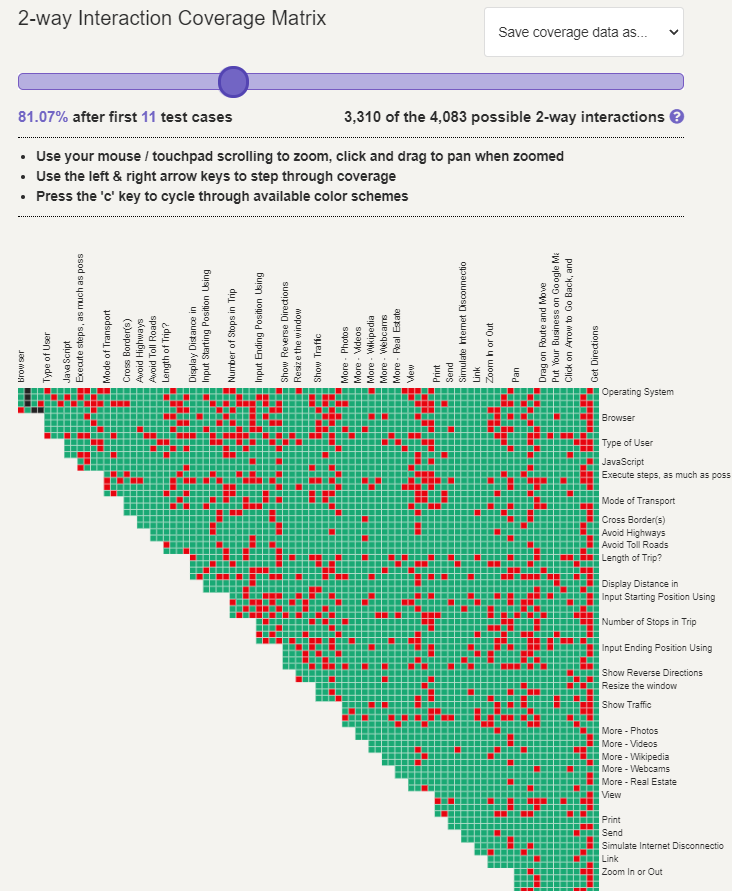 The matrix chart above shows every specific pair of values that would not yet tested together if we were to stop testing after test number 11.

For example, in the first 11 tests, there is no scenario that includes both (a) "Operating System - Mac OS" and (b) "Browser - Firefox." 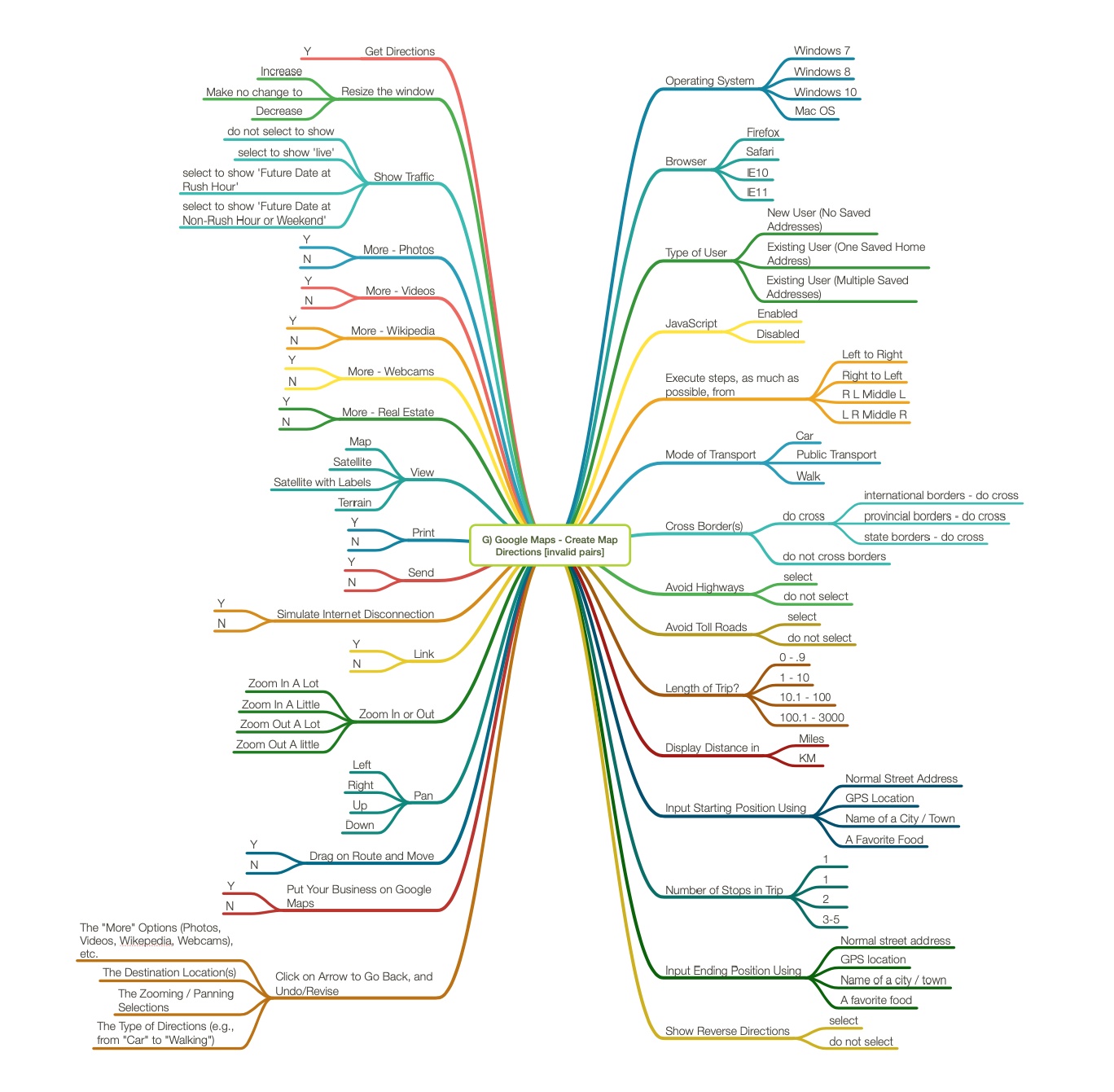 Hexawise supports exporting in several different formats. Mind maps can be a great option if a tester wants to get quick, actionable guidance from stakeholders about which variation ideas should (or should not) be included. Mind maps quickly demonstrates to stakeholders that the test designers have thought about the testing objectives clearly and they give stakeholders an opportunity to provide useful feedback more quickly as compared to having stakeholders read through long documents filled with test scripts. 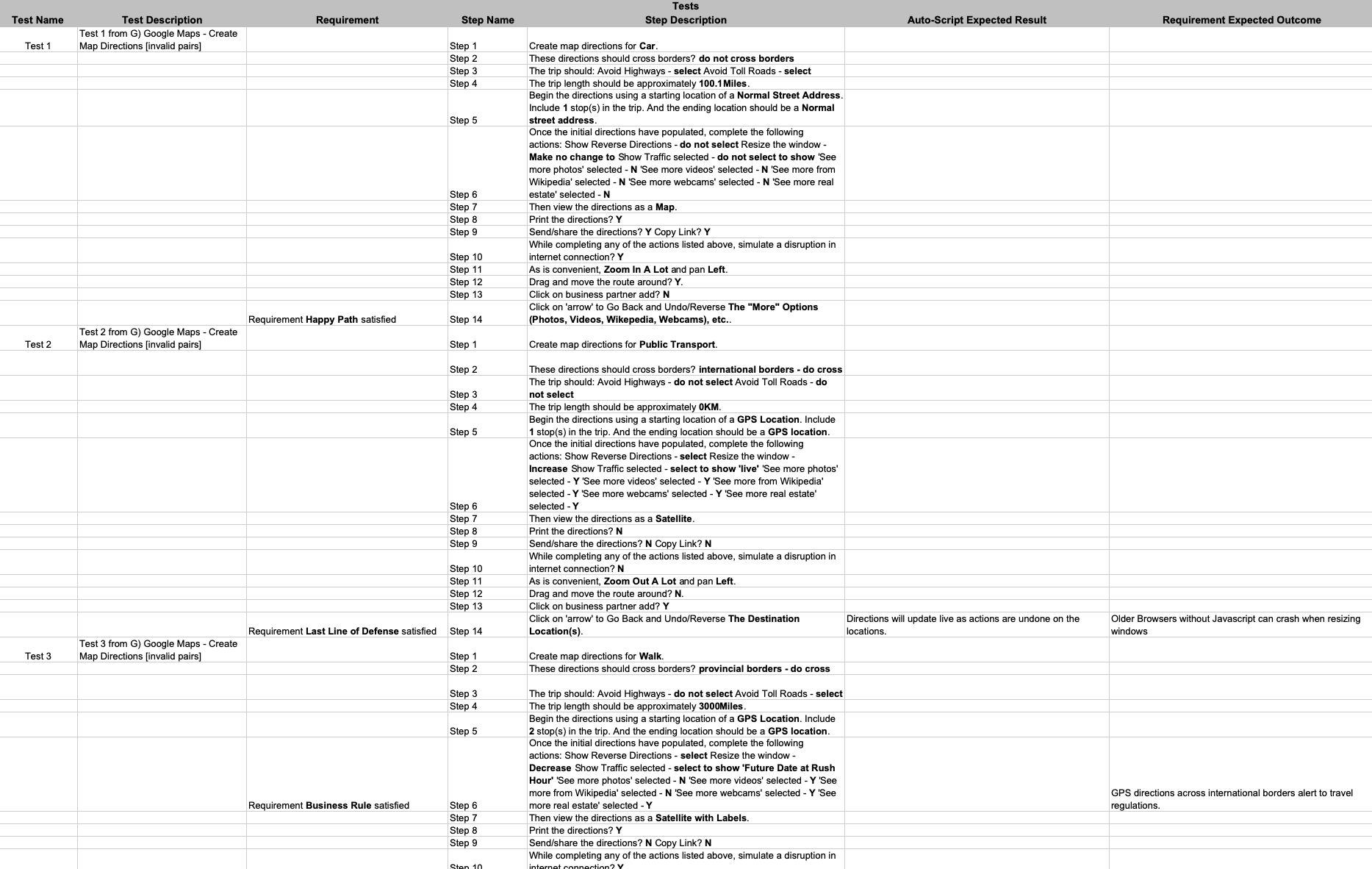 Previous: 1. Airplane Ticket Reservation
Next: Reasons for "Practitioner" Classification
Did this answer your question?