This is an overview of a simple set of functional tests created in the Hexawise test design tool.

What are we testing in this example? 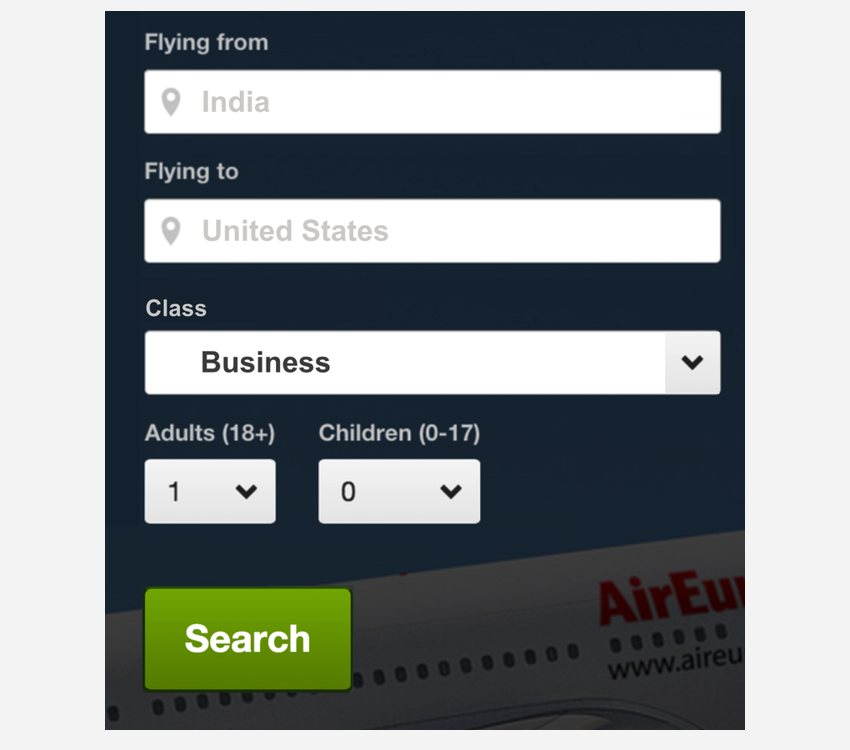 We know that testing each item in our system once is not sufficient; we know that interactions between the different things in our system could well cause problems. As thoughtful test designers, we want to be smart about testing for potential problems caused by interactions without going off the deep end and trying to test every possible combination.

This is a simple plan. If you're looking for a complicated sample plan, this ain't it.

How should we describe the quantity of adult tickets that can be purchased? How many values should we use here? This test design consideration comes up very frequently. How we answer the question has significant implications here (and in many Hexawise test plans).

The drop down menu above shows 6 different quantities. The drop down list under Children includes "zero" as an option as well.

Designing powerful software tests requires people to think carefully about potential inputs into the system being tested. As described in this blog post, we strongly encourage test designers to ask the newspaper questions of who?, what? when? where? why? how? and how many?

Once we have thought through what test conditions are important enough to include in your model (and probably excluded things that will not impact how the system being tested operates), Hexawise makes it easy to quickly create powerful tests that will allow us to maximize our test execution efficiency. 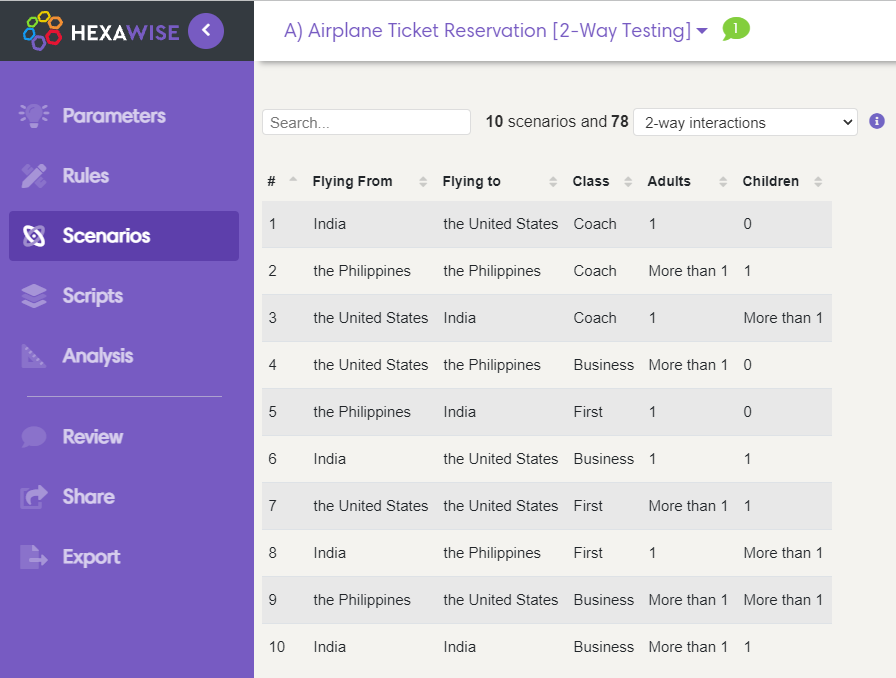 Hexawise gives test designers control over how thorough they want their testing coverage to be. While this is a very simple plan with only 162 total possible scenarios, in many cases, Hexawise would allow testers to quickly generate dozens, hundreds, or thousands of tests using Hexawise's "coverage dial." 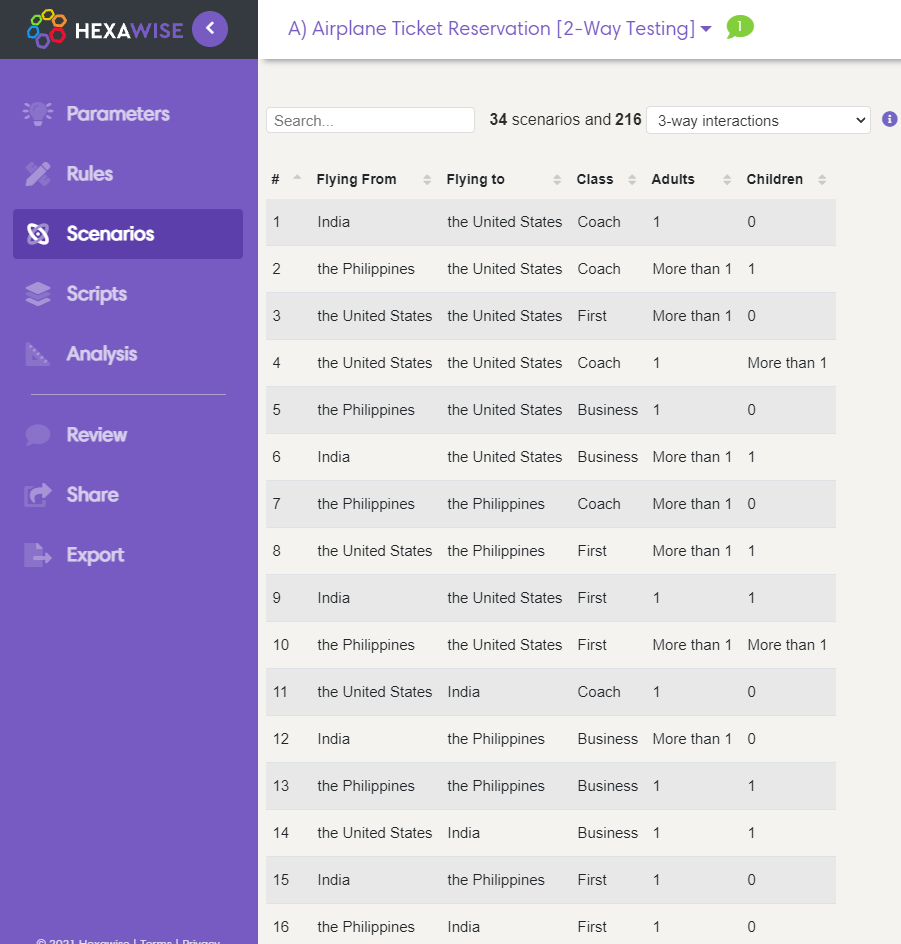 Hexawise generates and displays this set of 3-way tests to you within a second or two. This 3-way coverage strength would be dramatically more thorough than typical sets of manually selected scenarios typically used by large global firms when they test their systems.

If a tester spent a couple hours trying to select tests by hand that achieved 100% coverage of every single possible "triplet" of Values (e.g., (i) From the United States, (ii) flying First Class, and (iii) with More than 1 child), the following results would probably occur:

We are keeping things simple for this example. 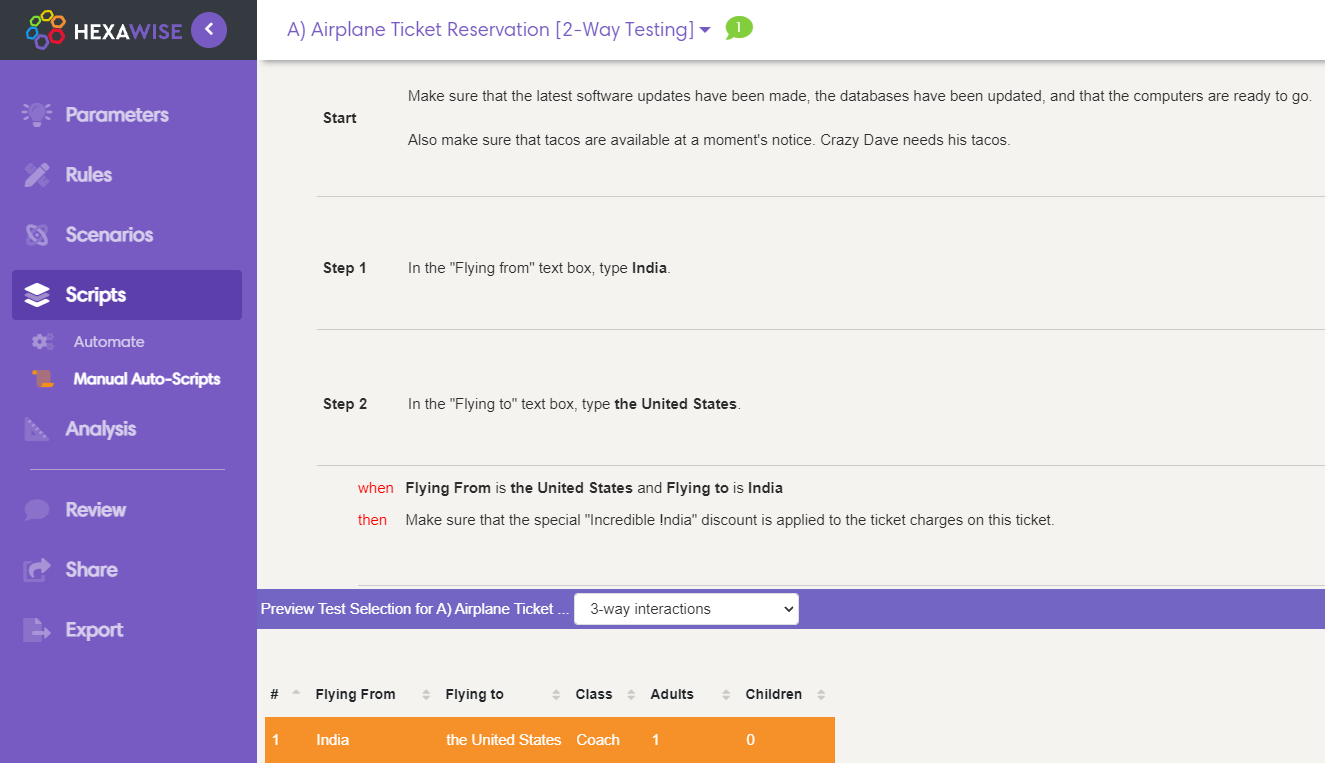 The Auto-scripting feature saves testers a lot of time.

You document a single test script in detail from the beginning to the end. As you do so, you indicate where your variables (e.g., "the United States" or "India" or "the Philippines") are in each sentence. That's it. You're ready to export all of your tests.

From there, Hexawise automatically modifies your sample/template test script and inserts the appropriate Values into every test in your plan (whether your plan has 10 scenarios or 1,000). 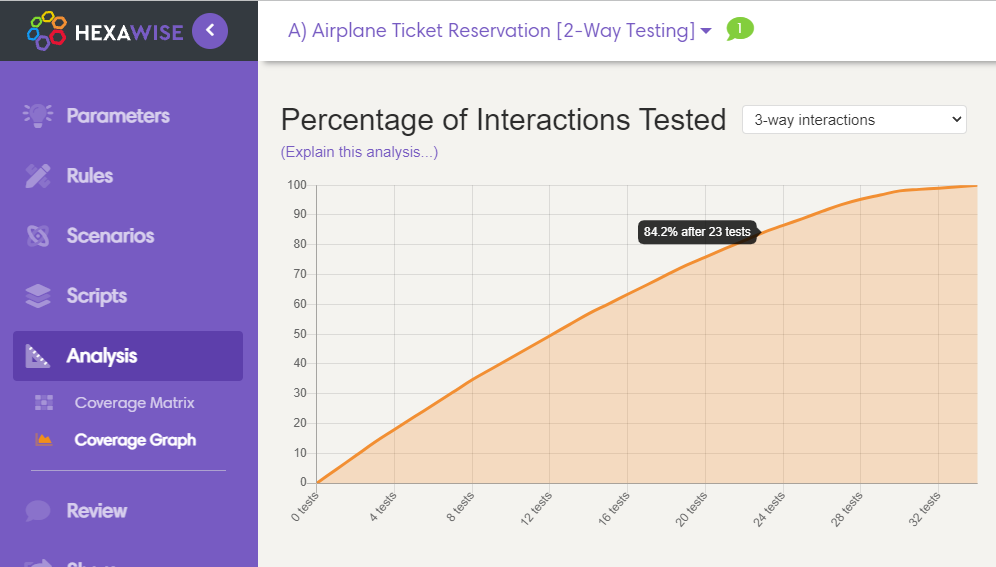 After the first 23 tests were executed in the "3-way coverage" version of this plan, more than 84% of all possible "triples" would have been tested for.

With Hexawise's matrix reports, we can even tell which specific pairs have not been tested after any test 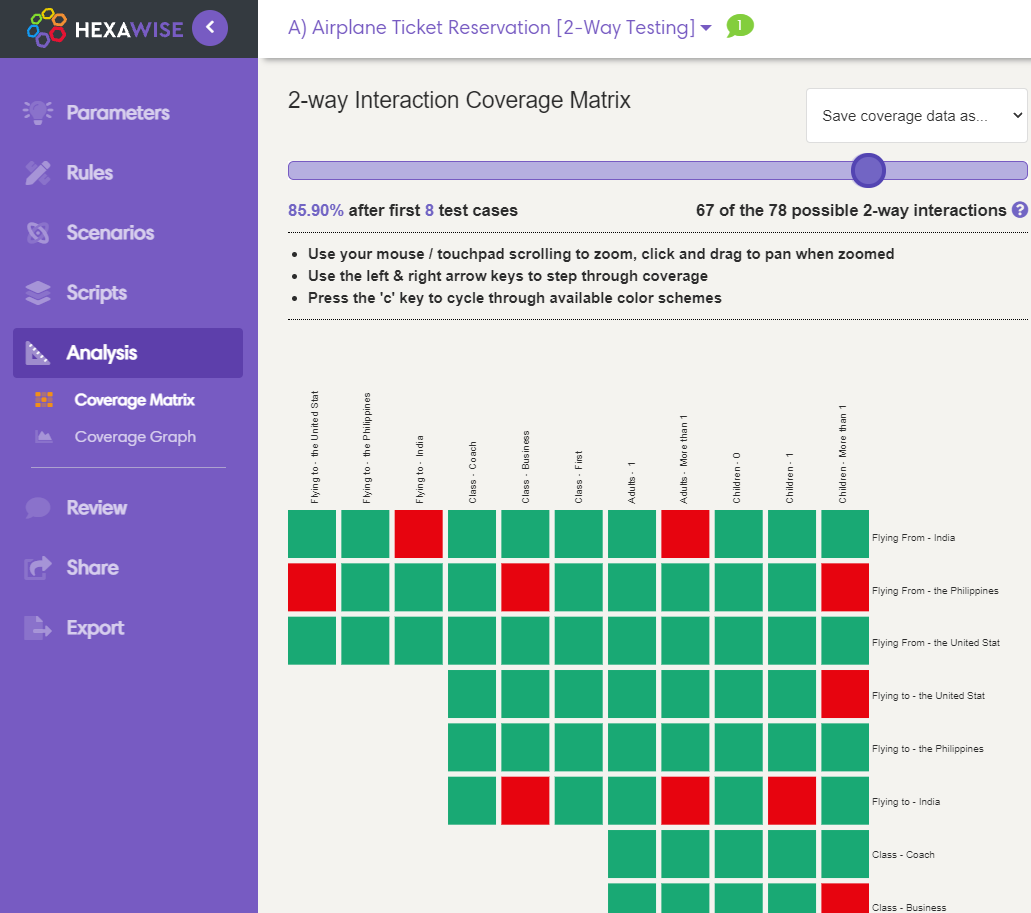 The matrix coverage chart shows that after the first 8 tests (of the 2-way coverage version of this plan), there are exactly 11 pairs of values that have not been tested together yet. Pairs like "Flying to = India" and "Class = Business" have not yet been tested in the same test.

If you open up this sample plan and look at the matrix chart view when number of tests is set to 10, you will see that the entire chart is green (because all pairs of values have been tested together at least once in the plan's 10 tests).

Before exporting our tests to discuss them with stakeholders, we review the Test Plan Scorecard 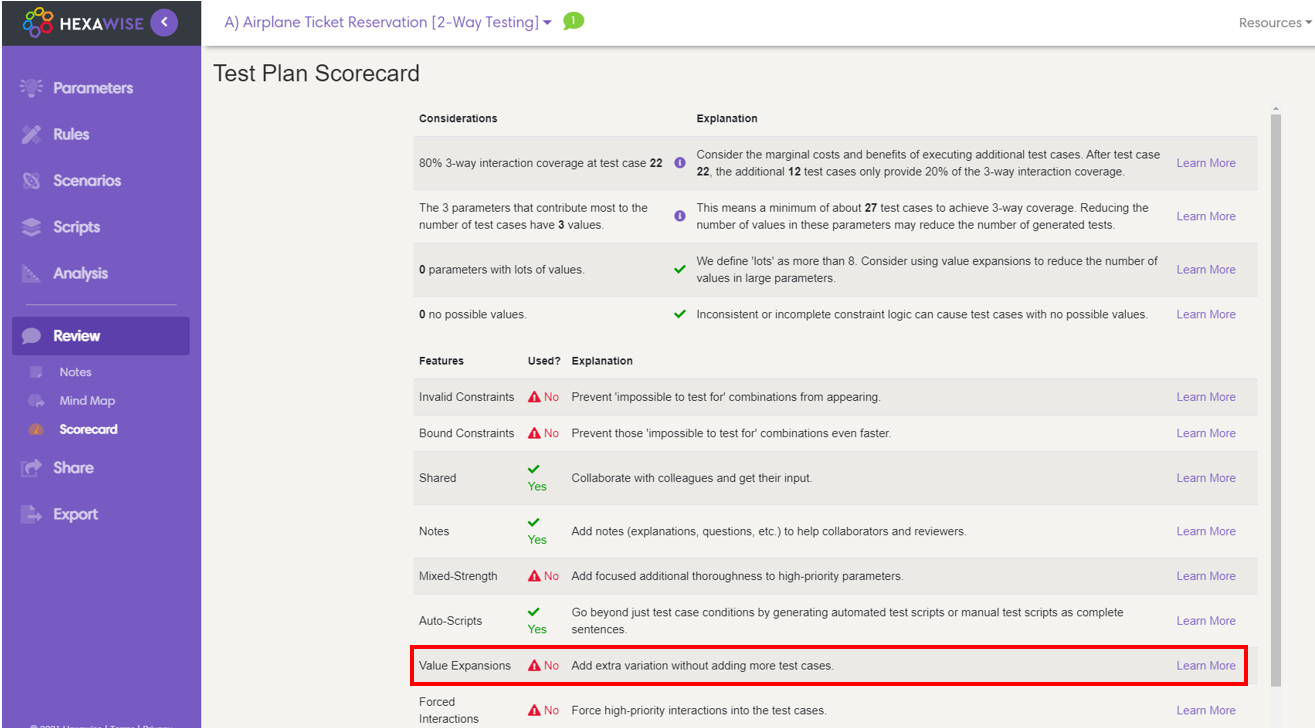 Hexawise's Test Plan Scorecard provides automated analysis to help you review each of your plans.

Mistake Identification: We have helped testers build test plans for years. In doing so, we have seen the most common test design mistakes that new users sometimes make. We have put in automated warnings to alert testers when something looks like it might be wrong with their set of tests.

Feature Usage Ideas: The scorecard identifies features that have not yet been used in your plan. Here, for example, the scorecard highlights that the Value Expansion feature has not been used. A tester clicking on the "Learn More" link would discover that using the Value Expansion feature would allow to make this particular test plan more thorough than it is - without adding any more tests. 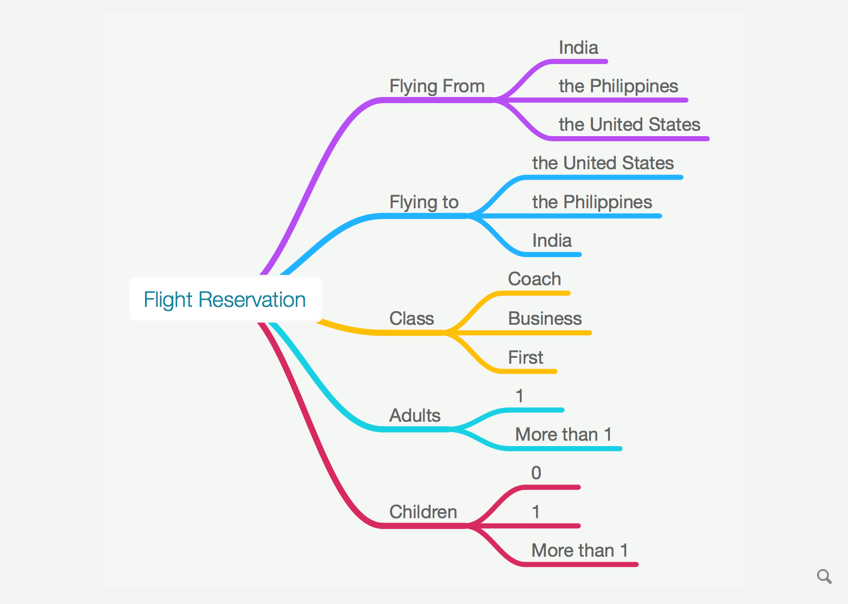 You can export from Hexawise in several different formats. Mind maps can be a great option if a tester wants to get quick, actionable guidance from stakeholders about which variation ideas should (or should not) be included.

As shown below, detailed test scripts (complete with tester instructions and Expected Results) can be exported also. 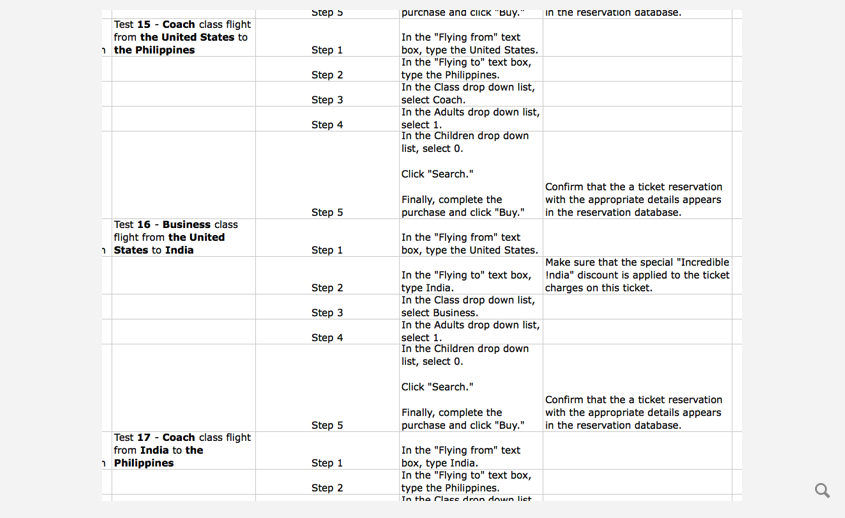 Previous: Reasons for "Novice" Classification
Next: 2. Google Maps - Create Map Directions
Did this answer your question?