All Collections
Getting Started
How can I best identify variation in the system I'm testing?

How can I best identify variation in the system I'm testing?

Learn how to identify & evaluate Parameter candidates in your systems under test and how to optimally include them in your Hexawise models.
J
Written by Justin Hunter
Updated over a week ago

When test designers struggle to use Hexawise, the most common reason is identifying what factors & ideas should be included in the "Parameters" screen. To help address this challenge, this article describes several categories of variables that are often useful to include in software tests.

At the risk of stating the obvious, you'll need to use your judgment here; not all of these categories will be necessary (or even useful!) to include in all of your sets of tests.

An overview of variation ideas

Variables for software tests can be described in these general categories.  It is important to remember that when you're entering variables into the "Parameters" screen, you should include test inputs only.  You should not include outcomes or expected results (as a general rule; for exceptions, please see this article).

Environmental variations relate to different potential combinations of hardware and software that people might use, as well as the different locations of data that might be pulled from when a given transaction is executed. Imagine you're creating some end-to-end tests for a flight reservation system, like hipmunk.com (a site widely praised for its exceptional User Interface). As a web application, you would probably want to include multiple combinations of hardware and software configurations.

Hardware configuration inputs could include:

Software configuration inputs could include:

Channel inputs could include:

User Variations relate to how different people might navigate through the System Under Test based on their particular habits as computer users.  They can also include, as in the case of an "Admin User" with special rights, the particular features of the system that they have available to them based on the kind of user that they are.

For example, User Variations that may be considered in end-to-end tests of hipmunk.com, might include:

User rapidly clicks multiple times on submit buttons and next buttons: no, yes, no (Note: double-weighting 'no' will make it appear twice as often as 'yes')

Usage Variations relate to what different features of a system people might use, as well as how they might use those features, and the different types of data that might be used in different scenarios.

Actions that could vary from test to test in our hipmunk.com example could include:

Special Meal Requested: None, None, Vegetarian, Kosher (Note: double-weighting 'None' will make it show up twice as often as 'Vegetarian' or 'Kosher')

Data that might vary will often be inextricably interrelated to usage examples (directly above).  Each of the user selections above, for example, would create data that should be stored by the system.  That's one of the reasons we categorize "Actions" and "Data" together as "Usage Variations."  Even so, "Data" can be useful as a trigger for additional testing ideas such as quantities, data ranges, and specific data formats.  Here are some examples of test inputs that could be included from this example:

"Hendrickson Variables" offer a great checklist to tick through as you think about possible variables to add.

Elisabeth Hendrickson published "Explore It!" in 2013. In our opinion, it is one of the best software testing books ever written. We highly recommend it to new and experienced software testers alike without reservations.  It's available for purchase through PragProg and Amazon. Chapter 4, titled "Finding Interesting Things to Vary," is particularly outstanding. The chapter does a superb job of articulating not only what kinds of variables you can change from test to test but also why it is such a good idea to vary them. These "Hendrickson Variables" come from Chapter 4 of "Explore It!"

Hendrickson lays-out her list of Interesting Things to Vary as follows:

A "rule of thumb" to guide you as you decide what things should be included and excluded in the Inputs screen: 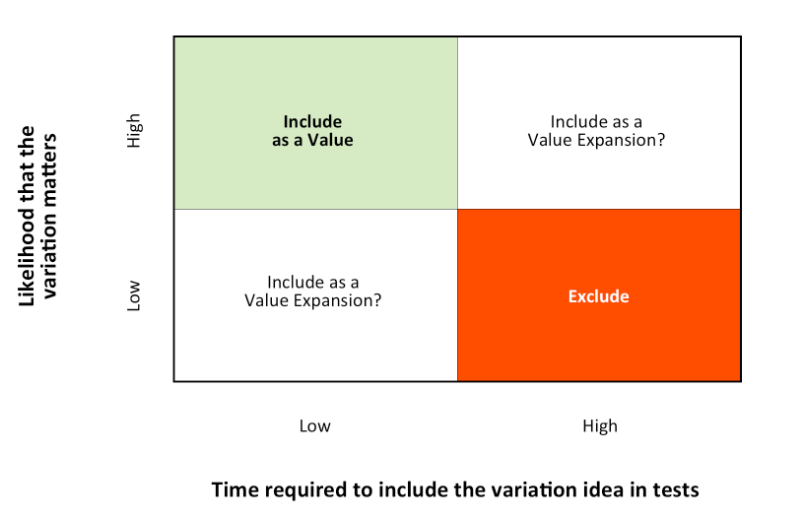 Deciding whether to include a specific test idea often comes down to a judgment call by the test designer using Hexawise.

INCLUDE - If you have reason to believe that including a test input is likely to matter and it would not take much extra time to vary that idea in each of the tests in your test set, then include it. An example: if you're testing a transactional web application and prior releases have had quite a few defects associated with the IE10 browser, include "Browser Type" as a Parameter and "IE10" as one of your Values.

EXCLUDE - Conversely, if you suspect that a particular test idea is not going to make any difference and that variation would take considerable time to include in each of your tests, then do not enter those into the "Inputs" screen of Hexawise. An example: as pointed out by James Bach, defects have been triggered by blocked cooling vents above servers on extremely rare occasions . This caused a server to overheat. Even so, it would rarely be sensible to invest the time necessary to test out multiple test scenarios with overheated servers on a given set of tests.

When you're first getting started, feel free to experiment!

Your ability to make judgment calls will increase as you gain experience. When you're experimenting, don't be afraid to add a few more test ideas into the scope of your test sets than you're used to. You will notice that when you design tests with Hexawise, you can include more test ideas in the scope of your tests than you're used to including. That's because:

Previous: Quick Tour of the Parameters Screen
Next: Quick Overview of Outputs from Hexawise
Did this answer your question?